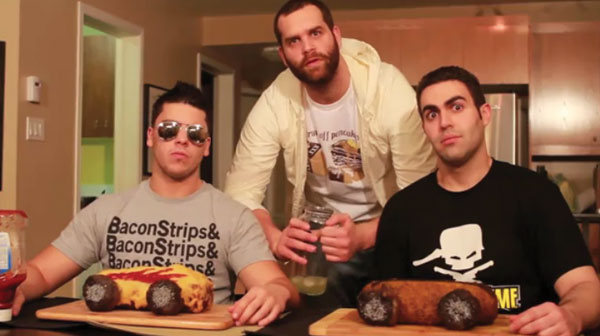 If you like bacon, fast food, bacon, bacon, Jack Daniels, and bacon, then you'll love the guys over at Epic Meal Time. The group of culinary geniuses celebrated their second anniversary recently by creating a deep dish fast food pizza filled with an ungodly amount of calories. Here, see for yourself: Disgusting, right? But it's so entertaining. Epic Meal Time's YouTube channel is one of those you can spend an hour on without even realizing it. All of their videos are equally repulsive yet so deliciously fun to watch. The guys take all the foods Mom tells you not to eat and finds a way to bring them together for one entree. Examples include fast food sushi, tequila tacos, fast food lasagna, and a Thanksgiving bird inside a bird inside a bird inside a pig. I recommend watching all of those. The Epic Meal Time guys, though extremely talented in the kitchen, are why everyone else hates America.   News and views. And bacon.

And in #BeatGeorgia news, the football team got its last practice in Thursday before the Dawgs come to town, and one of the main things Joker and his staff are preaching to the guys is to get off to a better start than they have been in previous games. “One thing we have been practicing, talking and preaching, is lets get off to a good start,” Phillips told the media after practice. “We have got off to a fast start in a few games and played well for a half. The thing we have to do is put together two really good halves and that starts with playing and starting off fast. That is the thing we have been preaching this week.” Kentucky's last offensive possession was a 61-yard touchdown pass from Jalen Whitlow to La'Rod King, so maybe that momentum will carry over into the Georgia game. No?

With Smith and Towles still out, Jalen Whitlow will get the start again for the Cayts, and according to Joker, Whitlow's practice this week has been somewhere in between good and bad. He said, "You can’t blame a guy that’s been thrown into the situation he’s been thrown in. He’s probably in between a good and bad week. But his showing in games hasn’t reflected the way he’s played in practice. He didn’t have a real good week the week we played South Carolina and I thought he played really well. He had a good week in some other weeks and then didn’t play as well in those games. So, it’s hard to figure out what you’re going to get on Saturday, especially with a young guy. We’ve just got to show up, see what we get from him.”

Kentucky needs to win out to make a bowl game.  Moving on...

I've seen All-Access Kentucky five times. How many you got? I know there are some high numbers out there. My favorite part: "My wife makes a really nice salad that I enjoy eating."

Over in the league, Anthony Davis scored 15 points in the first half for New Orleans in the 97-68 loss to Atlanta. He finished with 19 and seven rebounds to go along with Darius Miller's two points and one rebound. Brandon Knight scored 12 with five rebounds and four assists in Detroit's loss to El Heat.

The Herald-Leader has a good read on Marcus Lee's volleyball career.  Lee's AAU coach told the newspaper, "“(Volleyball) helped his timing – how to go and get the shot and not just swing at it. You have to control the ball in volleyball. There’s a little art to it.” Lee has said in the past that volleyball is his favorite sport.

From Matt's evening notes: We will be playing KSR BLIND DATE for FRONT ROW tickets to the Blue/White Game. Yes, you can get tickets to trip the referee by playing the game. What we need is a young woman who is interested in going on a blind date with another UK male fan to the game on the front row. You will get to pick your date from four contestants in a “Dating Game” format. If you are up for it (and why wouldn’t you be), email Matt at [email protected] and let him know your information and why you should be picked. It will be a lot of fun and the reward will at the very least, be front row seats, and maybe even the love of your life (you at least know you have basketball in common).

Kentucky Sports Radio radio will be broadcasting from Keeneland Friday morning. If you're at the track, look around for the tall guy with the nose whistle and his bearded friend. We'll be wearing headsets.