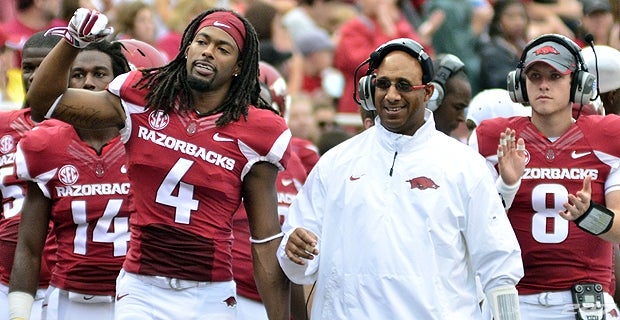 247[/caption] Mark Stoops has made his first assistant coaching hire of the offseason. Former Arkansas assistant Michael Smith will beome the Wildcats’ next wide receivers coach, according to Zach Barnett of Football Scoop.  Smith will replace Lamar Thomas after spending five seasons on Bret Bielema’s staff. Smith previously worked with Stoops at Arizona.  He coached the running backs for a year and the receivers for another year, while Stoops called plays on the other side of the ball as his brother's defensive coordinator. Smith spent most of his coaching career working for his alma mater, Kansas State.  On the field, Smith was one of the best receivers to ever play in the Big Eight conference, finishing his career as the Big Eight's second-leading receiver.  Smith was a Third Team All-American in 1991 and an honorable mention selection in 1989.  As a coach, he's become a well-respected recruiter for finding talented players in the state of Louisiana. [mobile_ad]