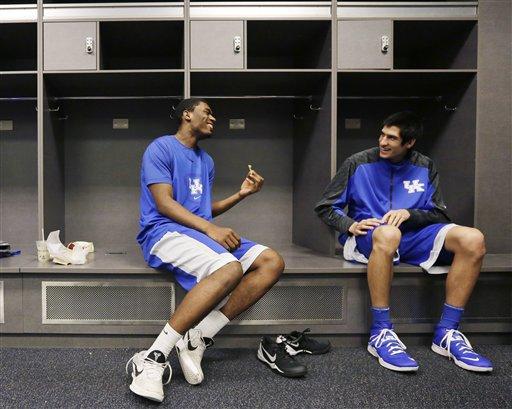 Eric Gay | AP[/caption] The last time Derek Willis and Dakari Johnson officially shared the same court, it was on college basketball's biggest stage.  This afternoon in Orlando the two tried to woo NBA executives in the Summer League. Willis' Pistons blew a big late lead to fall to Johnson's Thunder 92-91.  Reliant on others to set him up for open outside shots, Willis still found a way to be active.  In one short stretch he had a rebound, a steal that led to free throws, an assist, then another rebound.  The steal almost resulted in a poster to end all posters.

Derek Willis ain't scared. He goes hard to the rim but takes a lick. pic.twitter.com/uS5mYJ653H

Willis finished with 2 points (o-for-1 from behind the three-point line), 2 rebounds, 2 steals & 1 assist in ten minutes of action. Wearing the OKC blue, Dakari Johnson was dominant inside.  The former UK center had an 18-point, 10-rebound double-double.  These are the type of plays Kentucky fans have seen before.

Dakari doing what Dakari does best: offensive board to the right-hand hook. pic.twitter.com/imFEE3oOsn

That's not the type of play that's kept Dakari in the D-League.  Johnson needs to prove that he can be consistently active in the post and run the floor.  He did just that today.