KSR is partnering with Bridgestone Arena to offer premium seating at the 2019 SEC Tournament in Nashville. Check one of the best BBN experiences off the bucket list with one of these amazing options:

Kentucky's win over No. 1 Tennessee is in the rearview morrow.  Now it's time for the fourth-ranked Wildcats to earn another SEC road win. The duel between the Cats and the Tigers will be a nightcap.  If the late tip doesn't prematurely put you to sleep, Missouri's credentials might.  In Cuonzo Martin's second season, the Tigers are .500 through 24 games, with only three wins in SEC play.  Two of those were at Mizzou Arena, most recently defeating Arkansas by one last Tuesday. Missouri is led by Jordan Geist.  The 6'2" combo guard from Ft. Wayne averages a team-high 14.2 points, 3.1 assists and one steal per game.  Jeremiah Tilmon fortifies the post with 10.9 ppg and 5.7 rpg, while former UK shooting guard target Mark Smith fills it up from three-point range, knocking down 47.1 percent of his attempts to score 12.1 ppg. On paper, the Tigers do not pose much of a threat, however, we've seen this song and dance before: Smith will catch fire, The Zou will go crazy and the Tigers will push UK against the ropes.  The only question is, will Kentucky be able to weather the storm after an emotional victory?

"The Journey" is Here

They just keep getting better.  From the wide shots of the crowd and Marlana's National Anthem, to Kenny Payne's pregame message to Ashton Hagans and John Calipari's mispronunciation of "mano a mano," Chapter 25 has it all. https://twitter.com/KentuckyMBB/status/1097712110568656896

Kentucky is the late game on ESPN's Super Tuesday slate, tipping off at 9:00 pm with Karl Ravech, Jimmy Dykes and Laura Rutledge on the call.  If you can't get in front of a TV, there are a few different ways you can listen to the Voice of the Wildcats:

It should not surprise you to see that the Cats are 11-point favorites over the Tigers.  The total is set for 133.5.  Wager accordingly (but remember that UK is 8-1-1 ATS over the last ten games).

Before Kentucky tips-off in CoMo, listen to Matt Jones and the KSR crew preview the matchup between the Cats and the Tigers.  All of the action begins on 630 WLAP or online at 6:30 pm.

You've seen it from just about every angle, but this time lapse of Hamidou Diallo's dunk from the New York Times might be the most incredible image yet. 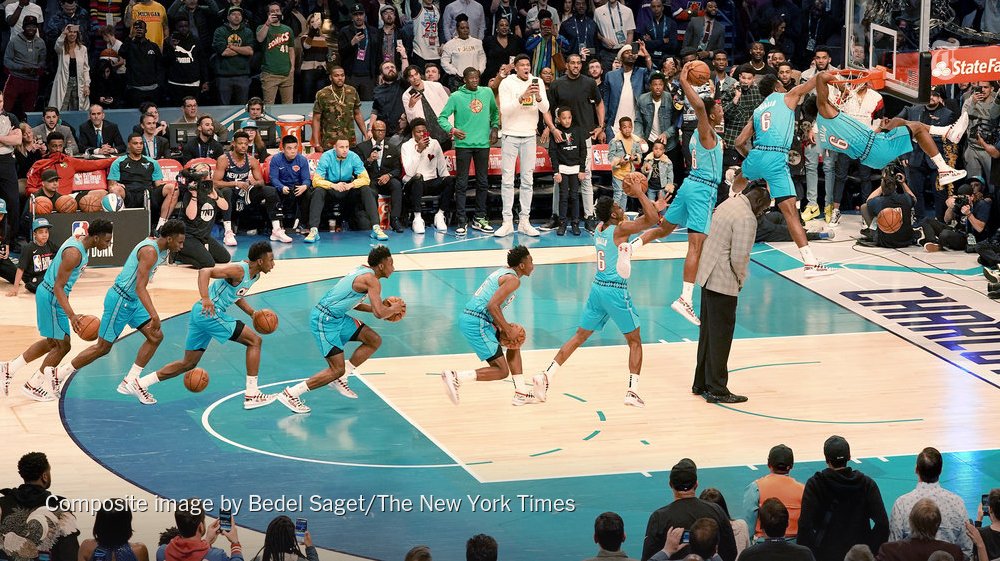 The Lexington Catholic four-star quarterback, and son of former Wildcat Bill Allen, has been on Kentucky's radar for quite some time.  After receiving the Blue Carpet treatment from Vince Marrow last weekend, the University of Georgia extended a scholarship offer to Allen.  A Top 15 pocket-passer in the 2020 class, preventing Allen from leaving Lexington will not get any easier.

What is Trevor Lawrence Doing?

A month after winning a National Championship, quarterback Trevor Lawrence is playing intramural basketball at Clemson.  It only takes one hardo to display why that's a terrible idea. https://twitter.com/BarstoolClemson/status/1097662403175727106 You shouldn't worry about a hard screen on Lynn Bowden at the JC.  UK scholarship athletes aren't allowed to play in officially sanctioned intramural leagues, a policy Clemson should consider adopting.

You might not remember Mr. Mendonsa's name, but you've surely seen him before.  George Mendonsa, who passed away yesterday at 95, is the sailor who was captured kissing a nurse in Times Square on V-J Day in 1945.

The photograph by Alfred Eisenstaedt is one of the most iconic and uplifting images of the 20th century.  In a reunion with the nurse, Greta Zimmer Friedman, at Times Square in 2012, Mendonsa shared his side of the story. "The excitement of the war bein' over, plus I had a few drinks...So when I saw the nurse I grabbed her, and I kissed her." One final salute for an American Hero. [mobile_ad]