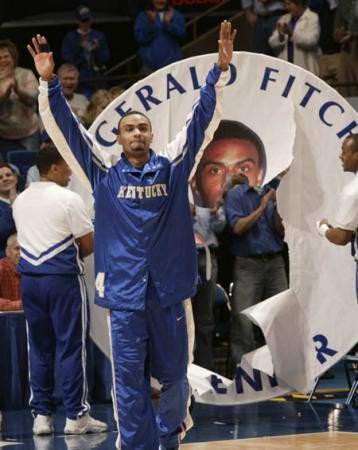 And the Kentucky-Turkey connections continue.  Earlier today it was released that former wildcat and fan favorite Gerald Fitch has signed with Aliaga Petkim – a member of the Turkish Basketball League.  And for some reason the blog with the biggest article about the acquisition is Spanish.  Word.

Here’s an excerpt, translated in all it’s broken English-ey goodness.

Gerald Fitch and has equipment. After completing the process of recovery from injury which prevented him from being part of the staff of Fuenlabrada basketball this season, the explosive scorer, America has reached an agreement with the Aliaga, the TBL.

Thus, the guard who dazzled the world ACB during the first half of last season returns to the Ottoman League, where he showed his arsenal to all over Europe playing with the Kepez Antalya in the 2008-09 season, Solidifying a great year that allowed him to sign for a European giant like Baskonia-although the case of Bulgarian passport Mickeal prevented play a single minute.

Good job Gerald.  But while you’re over there, do us a favor and beat the hell out of Febernahce and their crooked owner, could you?  Thanks bud.