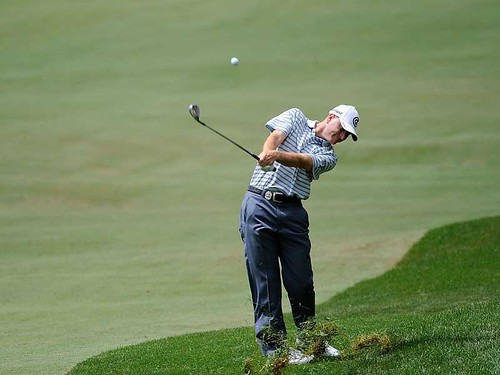 Now that is a healthy divot. Quick. What do Padraig Harrington, Stewart Cink, Vijay Singh, and Jim Furyk all have in common? If you said they were all mentioned as possible contenders for the Masters this year you are right (also accepted: Guys that have super hot wives/girlfriends. I was at the Ryder Cup and yowza isn't a strong enough word.). You know what else? All those feebs missed the cut. After Friday, the Masters set the cut off at +4. Our UK grad, Steve Flesch, barely missed the axe at +2. Kentucky native, hero, and Calipari buddy Kenny Perry was tied for 15th at -1 to safetly make it past cut day. Since then, Flesch has righted the ship and posted a 70 in round three and is currently even for the tournament. Perry has done a little better and sits at one under after a round three where he shot par. Both Kentucky boys are in back-to-back groups for round four as Flesch tees off at 12:50 and Perry follows at 1:00. Flesch is paired with Australian Adam Scott and Perry will walk the grounds with Argentine (Argentinian? Meh) and the dude that beat him out for the Masters in a playoff last year, Angel Cabrera. That might be a touch uncomfortable. If you want an entertaining article on UK grad Flesch, check this out. Favorite quote? When talking about 'plumb-bobbers' (looking at you, Sergio), Flesch states, "It's not a missile launch. It's golf." Exactly. Additionally, the UK Golf Team will be wrapping up its UK Invitational in the few hours. At the start of the day Sunday (where they will wrap up the second round that was postponed due to darkness yesterday), UK was in a tie for fourth place in the tournament that boasted 24 teams. UK and Auburn are in the tie for fourth at +1 while Miami of Ohio leads the tournament with a -3 overall. Big day for golf in the Bluegrass. Huge! Quickly!