Guy Morriss will be Back in Lexington
Article written by: 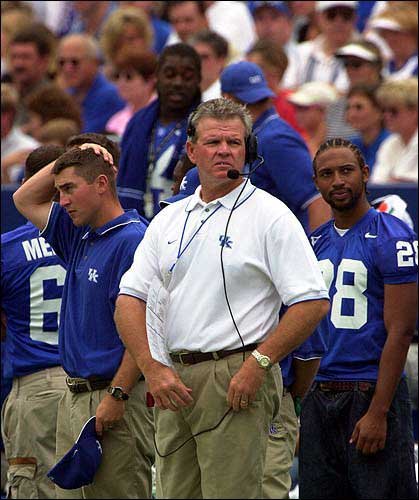 A former Kentucky football coach is coming home to coach, but not at his old school.  According to Alan Cutler, Guy Mo will spend the 2015 football season coaching the offensive line at Lexington Christian Academy.  Morriss coached the offensive line at Warren Central in Bowling Green last year. There are mixed opinions about the man who ride a motorcycle into Commonwealth Stadium.  Taking over the program in the midst of probation fallout, the Cats could only muster two wins in his first season.  They turned it around quickly in year two thanks to the likes of Jared Lorenzen, Derek Abney, and SEC Offensive POY Artose Pinner.  Banned from the postseason, they still managed seven wins, winning three SEC games after starting the season with a win at Louisville (we can forget about that ALMOST win against LSU).  Unfortunately he got the chance to go home and coach at Baylor, leaving shortly after the successful season, putting a bad taste in the mouths of many. As he returns to Lex, let's remember the good times with Go Mo with some highlights from a beat down win over UTEP, with Rob Bromley on the play-by-play.