There are groups of people that dislike each other and then there are the Hatfields and McCoys. These two families entered into a bitter rivalry in the late 1800s and were engulfed in an historically bitter feud for about 26 years (1865-1891). It seems the McCoys were a little upset when a group led by one of the Hatfields murdered Asa McCoy on January 7, 1865. Then 13 years later, the two families argued over the ownership of a pig, which eventually led to the murder of one of the Hatfields. Basically, all hell broke loose in the years following that murder and the feud became legendary. For many years, the mention of the Hatfield/McCoy feud has been used as a metaphor to describe bitter rivalries.  While the actual fighting ended in 1891, a symbolic peace treaty was drawn up and signed on June 14, 2003. I'm a little nervous as there is a small, but obviously real, chance that the feud will start again this weekend in the midst of tomorrow night's UK/WVU game. The McCoy's were largely from the Kentucky side of the Tug Fork River. On the other side of the river, the West Virginia side, lived the Hatfields. Let's recap Friday and look forward to tonight: - Friday, Kentucky fans had very little time to celebrate the victory over Cornell and UK's return to the Elite Eight after a 5-year hiatus; the focus had to quickly shift to West Virginia - The Elite Eight is now set: East: 1. Kentucky vs. 2. West Virginia South: 1. Duke vs. 3. Baylor Midwest: 5. Michigan State vs. 6. Tennessee West: 2. Kansas State vs. 5. Butler - West Virginia's De'Sean Butler is a little banged up with an injured shooting hand; he downplays the injury in an ESPN article, but it's worth noting. - WVU's Devin Ebanks told Mike DeCourcy Friday that he will be guarding John Wall and he is looking forward to it: "I'm guarding John Wall. I'll be guarding him tomorrow. I'm looking forward to it. He's one of the best players in college basketball right now. So it should be fine." Somehow I think he's looking forward to it about as much as a colonoscopy. - A trend I've noticed that is worth pointing out: In games when Kentucky has shot just flat out terribly this season (such as 2-16 from long range last night), they shot tremendously better in the next game; let's hope that trend continues. - Congratulations to John Wall for breaking yet another record; he surpassed Roger Harden Thursday night to set a new all-time single-season assist record at Kentucky. - Speaking of Wall: does he have a chance to surpass Evan Turner in the race for National Player of the Year? I thought the race was over, but Wall is turning it on at the right time. I'm guessing there's no chance, but Wall is showing me a lot right now. His best attribute - he's just a good teammate that likes to win. - St. Mary's was simply destroyed by Baylor tonight, but one of their players did the John Wall Dance, so they're still cool in my book: 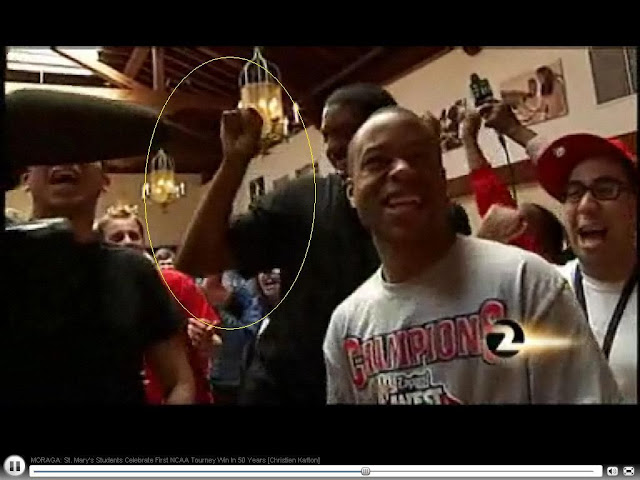 - Some big news to keep an eye on: Billy Gillispie (of Shell Station fame) and Tim Floyd (of O.J. Mayo fame) are apparently the two finalists for the Houston job, according to Chron.com in Houston. It has been confirmed that Gillispie has met with Houston. The other strong candidate, Sam Houston State's Bob Marlin, has accepted the head coaching  job at Louisiana-Lafayette. - Tonight's line: Kentucky -4 - Finally, I'm not sure anyone in the nation honestly expected the SEC to get two teams into the national quarterfinals, but Bruce Pearl and company sweated out a Sweet 16 victory to advance. The crazy part: they actually have a really good chance of advancing to the Final Four. Maybe we can ease some of the "SEC basketball sucks" syndrome if the conference makes up half of the national semifinals. - Stay tuned all day as we prepare you for the game that can send Kentucky back home, to the place we belong, Final Four, national title, take me home... Liven up Big Blue Nation. It's game day. Tonight's gonna be a good good night.