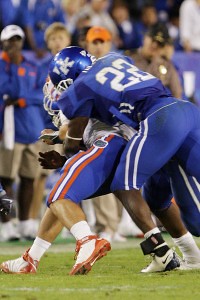 Florida is gonna get knuckled and buckled. Hut: Rich Brooks continues to be in the hearts and minds of those that watch and cover college football. Ivan Maisel talked with the former UK coach about his other college team: The Oregon Ducks. Apparently, PawPaw isn't very confident that the #5 Quack Attack can withstand the football powerhouse that is the Stanford Cardinal. Either way, it is nice that Brooks is still active and available within the college football community. I hope he pulls a Bobby Bowden, writes a book, and goes on a media tour telling knee-slapping stories and chumming it up with the likes of Dan Patrick and the PTI guys. Hmmm. Yeah, probably won't happen. Hut: Larry Vaught has an article that is chock full of killer quotes from UK players. The players try to answer the question as to how the Wildcat football program is perceived by fans and athletes in other areas. It is fair to say that the Cats are both brimming with optimism yet are fully aware of the ramifications of beating the Gators. My favorite new saying comes from my favorite player, Danny Trevathan:

"It is time to knuckle up and buckle up.”

Outstanding. We need to get the Legend of Cobb guys on this and get a poster for all the RB's and QB's that Danny and the rest of the wrecking crew knuckle and buckle. It'll be like UK's own version of Jacked UP!. Hike: The Miami Herald gives a little preview of the UK/UF game this Saturday. In a somewhat odd move for a Florida paper, the article praises UK for their balance on offense and criticizes the Gator O for being a little anemic. Let's hope that holds up and the Locke/Cobb duo shreds Florida and snaps that stupid streak of theirs. Saturday can't come soon enough.