Kristen Geil
So, in many ways, I don't quite have the normal resume to be working for KSR. I didn't go to University of Kentucky (Transy grad, so that's basically the same thing), and I don't live in Lexington currently (Chicago's an easy road trip though). However, I was thrilled to hear about the UK Alumni Charity game and spent weeks waiting by my phone for Cal's call that I had been invited to coach a squad. After all, I once met Tubby Smith at a Mariott Hotel charity event, and I went to Tin Roof often enough senior year to know when Darius was recycling graphic t-shirts he hadn't had time to wash.   You're probably as shocked as I am, but I never got that call. No matter. John Wall is legitimately more qualified than I am to coach, and Drake probably just whispered sweet nothings into Calipari's ear until he agreed to give the Canadian a chance. And let's face it- today's game is about entertainment, not true competition. Still, just in case they're reading this blog while frantically scanning the Internet for last minute "how to coach basketball" Google results, I've drawn up a couple of trick plays that guarantee victory.   The Air Bud Bamboozle: First, find a dog that has graduated from UK, perhaps in the Seeing Eye Dog Program. Preferably, this dog is named Keightley, Miller, Prince, Knight, or some other UK-inspired moniker. Stick a UK jersey on him. It's a given that all Kentucky dogs know how to play basketball, so just toss the ball in his general direction and watch the pup magically mouth the ball into the hoop. If a dog isn't available, a human player can pretend to be a dog, which will further confuse the opposing team.     The Wheelchair Jimmy: There's a solid chance that I'm the only one in the world who's obsessed with this fact, but before he was Drizzy Drake, Aubrey Graham played the inimitable "Wheelchair Jimmy" on the Canadian teen soap DeGrassi. His character, a rising basketball and music star, got shot and Jimmy was subsequently reduced to a wheelchair. 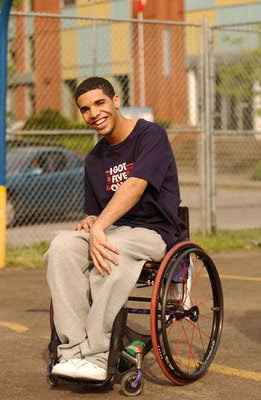 Here's how it works in the Alumni Game setting: Player (preferably one of the Fantasy Camp guys, because let's face it, they're older and it's a more likely scenario than Tony Delk throwing his back out) goes down with an injury. He later emerges from the locker room in a wheelchair to an ironically standing ovation from the Rupp Arena crowd. Opposing players don't know how to react- guard him as normal and be perceived as heartless and taking a charity game too seriously? Play in wheelchairs themselves to make it fair? Confusion ensues, resulting in Wheelchair Player's team dominating. In the last two minutes of the game, Wheelchair player drives (rolls) for a layup, rising from his chair en route to the hoop for a miraculous recovery and game-winning shot. Calipari announces that his next charity event will be a wheelchair basketball game featuring old UK players. Everybody wins.   The Annexation of Puerto Rico: Basketball Edition: Perhaps the best known trick play in history, the Annexation of Puerto Rico was popularized by the ragtag Little Giants of 90's cinematic fame. It was actually run by the Carolina Panthers last year, to great success.     This can easily be adapted for basketball purposes. Point guard "snaps" the ball to another player (with the snap being a behind the back pass), who leaves it on the ground. Guards and forwards run to the right, and one player picks up the ball and runs left for the easy dunk. Personally, I nominate MKG for the scoring position just because his love of The Lion King makes me think he would most appreciate the 90s nostalgia inherent in Little Giants.   If all else fails, have the WBA step in as assistant coaches. They know a thing or two about trick shots.   @KristenGeilKSR