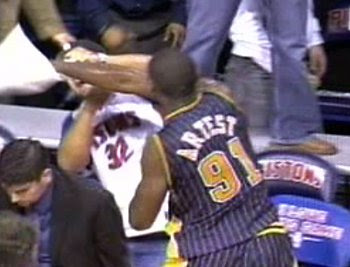 Friend of the blog, Gary Parrish, opined today on the state of the fans (read: student sections) at games these days. Citing particularly the behavior of West Virginia’s fan base during their win over Pitt on Wednesday (cups being thrown onto the court, a Pitt Asst. being hit just under the eye by a quarter thrown from the stands,) he concludes that the off the court actions were what stole the storyline that night.

This is a trend even those of us at Kentucky can find familiarity with, just remember what happened in Colombia, SC the other night (and no, the phantom ‘cold cock’ didn’t escape Parrish’s article either.)  Gary sums up some of the ‘warning signs’ he talks about here…

Two years ago, Memphis reserve Pierre Henderson-Niles reached into the UAB student section and slapped a fan who was yelling at the Tigers after their come-from-behind win. Last week, it was alleged that Kentucky’s DeMarcus Cousins took a swing at a South Carolina student rushing the court after the Gamecocks upset John Calipari’s Wildcats. And now we’ve got West Virginia fans throwing things, hitting a Pitt assistant in the face with a coin, and further sullying the reputation of a student section that two weeks ago chanted obscenities at Ohio State’s Evan Turner and last weekend took the “Karen Sypher” chants routinely directed at Louisville’s Rick Pitino to a previously unreached level.

Warning about the possibility of actions escalating to an Artest level Brawl… Parrish has a point.  But is this something that we can pin exclusively on the WVU student section, or is it really an epidemic throughout college sports? I think if the Kentucky fan base (in all their passion) can be nicer to Rick Pitino than Bob “is anyone surprised that my fans aren’t classy” Huggins’ Mountaineers, it may not be as wide spread as Parrish claims.  At the same time, I don’t want Orlando Antigua getting hit in the eye with a quarter next time we go on the road.  And whomever throws the imaginary quarter certainly doesn’t want to feel the wrath of Drew’s Bloody Lip.

So what do you think?  Are crowds in general crossing the line, or is it more of an isolated incident?  Is there anything anyone can do about it?  Speaking as a college kid, the fine my school might have to pay for me storming the court (hypothetically speaking, as there is no reason for Kentucky to storm the court… ever) wouldn’t deter me or any of my peers in the least.  I’m not sure what the answers are, and Parrish doesn’t really offer any solutions either.  But maybe it’s time to enforce the security Rupp has onto the rest of the country.  A comfortable shell of sleepy Blue Hairs around the court, protecting the players from the more ‘excitable’ fans.