Christopher Johns
I know it is probably an honest mistake, but this screenshot (taken right after Patterson's announcement) is too good to let slide: 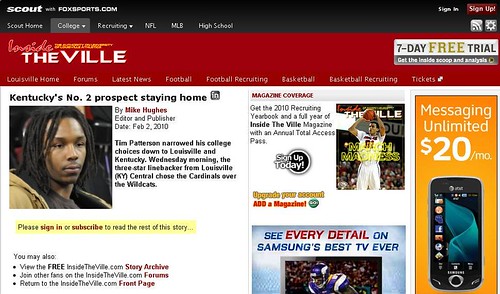 Caption: Tim Patterson narrowed his college choices down to Louisville and Kentucky. Wednesday morning, the three star linebacker from Louisville (KY) Central chose the Cardinals over the Wildcats.

NBC thinks this type of pre-reporting is just fine. For just $10 per month, you, (YES! YOU!), can have the latest inaccurate information available on the web! Also, the PTI guys battled a slow news day (slow because they don't like National Signing Day) by talking Kentucky basketball. DeMarcus Cousins is the focus of their debate and the theory that he might end up as a better professional player than John Wall. Both guys give Boogie a better than 30% chance to come out the better pro prospect. I love it when our team doesn't have a game and is still a running topic on one of the most popular programs on ESPN.