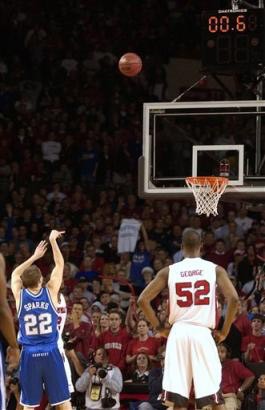 I spent some of today going around town and running some errands and every person I ran into had the same question, are we going to beat the filthy Cards? Had I been asked that question even three weeks ago, my answer would have been simple.....No. Kentucky has a talent gap at three of the five starting positions and a serious deficiency in athleticism up and down the court. But then over the last two weeks, strange things have happened. The Cats have played better, dominating on the defensive end of the court and having enough bursts of scoring output to win games on the offensive end. And Louisville has gone completely in the other direction. Samardo Samuels has not shown the ability to dominate games against opponents who key on him, EC5 and T-Will have had performances as ridiculous as their names and the guards have proven to be significantly weaker than even the most adamant Cards hater would have believed. So all of a sudden a team that I believe may have the second most talent in the country has lost to Western Kentucky (who got blown out by Evansville), Tubby's Minnesota and UNLV without their best player. Sunday now looks winnable. In fact, this game is firmly within Kentucky's wheelhouse to pull off the victory. The Cats have shown weakness at the point, but the Cards have been dreadful at the point, with Edgar Sosa pulling a Roderick Rhodes for a new generation. Earl Clark and Samardo have shown to be solid down low, but with Patterson and Stevenson playing well, it isnt clear that there is a huge matchup deficiency. T-Will can put up points, but so can Meeks, so you cant say that there is a huge gap there. And what is left is Preston Knowles or Jerry Smith versus someone like Liggins or Miller.....and that doesnt look all that scary either. Kentucky fans (being the most knowledgable in the game....as Bomani Jones, who does a radio show in Durham, NC agrees) recognize all of this and see blood in the water and a potential victory. But here is my worry. The common theme in beating Louisville this season has been to sag the defense and let their guards shoot threes. Western and Minnesota did this with a lot of zone and UNLV did it by playing a sagging man defense intent on slowing down Samuels and Clark. All these teams have watched Louisville throw up brick after brick, and then beating the Cards in the halfcourt game where those teams excelled. If Gillispie utilized that strategy, it could be a victory celebration for the Cats. But Billy Clyde has never played such a game at Kentucky and I dont see it now. For Gillispie, defense is about ball pressure and handling ball pressure is the one thing that the Cards do fairly well. Ball pressure allows the Cards to get up and down the court, exploit mismatches and have T-Will and Earl Clark take the ball to the basket rather than settling for jumpers....actually playing right into Pitino's hands. That is how the game played out last year in Rupp and we saw the dreadful result. I will be interested to see if Gillispie's alters his general defensive philosophy for this game. To some folks' surprise the Cats can play with the Cards team now on the floor, by doing exactly what Ole Miss, Minnesota, Western and UNLV have done.....let them shoot outside and control the paint. And unlike those other teams, the Cats have Patterson who can dominate the paint himself (although he MUST stay out of foul trouble). This game is winnable for the Big Blue and a minor alteration on Gillispie's general philosophy, combined with Meeks getting hot from the outside could produce a Card-crippling victory. If no such alteration is made, I worry that we play into the filthy Card hands and they produce a 10-12 point victory. But if Clyde plays to his team's strengths and puts Porter, Harris, Liggins, Stevenson, etc in a position to maximize their ability, I could see a shocker in Freedom Hall tomorrow and one that could truly propel this team going forward. Either way it should be interesting. Three weeks ago I dreaded this game.....now I bet Ricky P aint looking forward to it too much either.