Its a Florida Gator Day
Aritcle written by: 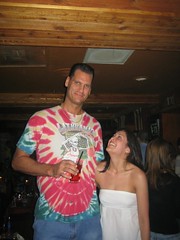 Watching College Gameday this morning has been mildly sickening. First, the Gators are the two-time National Champions and they have approximately 40 people there for the festivities. Way to represent strong there Gator fans. Then, the group decided to dissect what was "wrong" with UK and after Hubert Davis and Jay Bilas made a couple of good points (Davis pointing out that the injuries are the key, Bilas noting that Gillispie has protected his players and that effort has been 100%), then Digger Phelps made some bizarre remark about effort and the "inconsistency of Patrick Patterson," showing that he has (a) watched almost no UK games and (b) is a moron. Digger is maybe the least knowledgable commentator of college basketball on television....quite an award when you consider the state of the profession. But hey, Digger beat UCLA once, so we should care what he thinks. Today is Gator day and a tough game for the Cats on the road. We will have more on the game later, but for now think of the glory days when the Gators had guys like Dwayne Schintzus above. The Gators have not always been a power program and they wont always be a power program in the future. But with guys like Schintzus, Andrew Declerq and Da Meat Hook in their past, they will have always given us guys to mock....