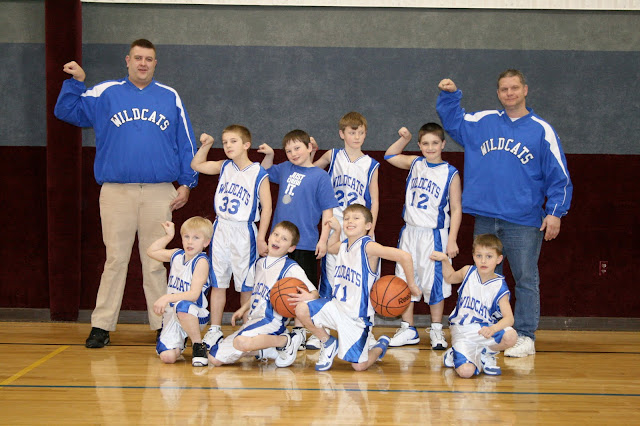 How about a shout out to the "Willard Wildcats" (above) doing the John Wall Dance? These young men reside in the Cleveland area and are big time fans of the Kentucky Wildcats. I am told that their coach is actually a Kentucky native, and it's great to see him spreading the Big Blue gospel. Well, following a tough sports weekend that gave us a Kentucky loss to Tennessee, a UK Hoops loss to Auburn and a United States hockey loss to Canada...it's just another manic Monday. In the grand scheme of things, however, the Cats' loss to the Volunteers is not that big of a deal. Kentucky is still in line for a No. 1 seed and they are ranked No. 3 in both major polls this week. It's true that the Cats picked up a little help from Kansas and Purdue, which both lost last week, as well - but, we'll take it. The top of the new AP Poll (and SEC schools), which was just released, looks like this: 1. Syracuse 2. Kansas 3. Kentucky 4. Duke 5. Kansas State 13. Vanderbilt 16. Tennessee ESPN/USA Today Notables: 1. Syracuse 2. Kansas 3. Kentucky 4. Duke 5. Kansas State 13. Tennessee 19. Vanderbilt - I am a little biased, but I feel that DeMarcus Cousins was shafted this week in the SEC weekly awards. For that matter, if Cousins did not win Freshman of the Week, then John Wall should have. Vanderbilt's John Jenkins was given the award after 2 games in which he averaged 13.5 points, 1.5 rebounds and 1.5 assists. Cousins averaged 17.0 points, 12.5 rebounds and 1.0 assists per game. Wall put in 15.5 points, 5.0 assists and 5.0 rebounds. Jarvis Varnado was named SEC Player of the Week. - John Calipari will be on a Maker's Mark bottle soon. See Patrick's post below for more details. - Here is an update on a handful of former Cats that are playing around the world. Fitch is leading the Spanish ACB League in scoring average. - Kentucky recruit Josh Selby cancelled his visit to Connecticut over the weekend due to car trouble (or at least that's the reason that was reported on ZagsBlog.com). He is scheduled to visit UK for the Florida game. - Andy Katz notes in his Weekly Watch article:  "But this was a true SEC road game against an opponent that plays extremely well at home in Tennessee. No reason to sweat this game, either." Katz is correct, there is no reason to panic after a loss at Tennessee. - Lunardi's latest "Bracketology" (updated today) has the Cats as the No. 1 seed in the East Bracket (Syracuse). He has them in a difficult first round battle with the fighting ??? of Stony Brook. ESPN Bracketology