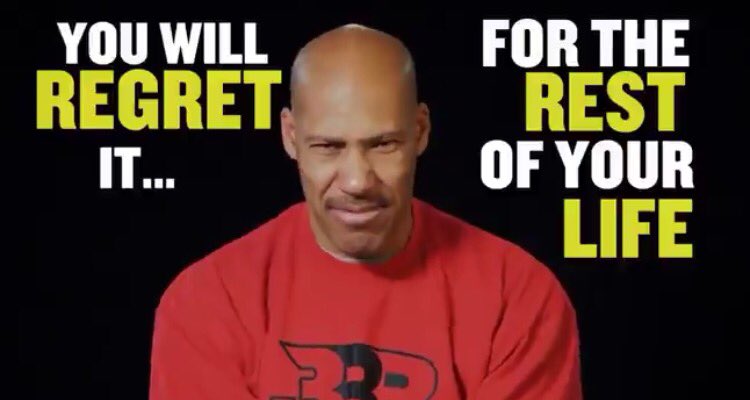 Back in late January, LaVar Ball told ESPN radio hosts he personally sent their colleague Jeff Goodman home from Lithuania for being "sheisty."

After being with the family in the land of the beautiful basketball for a little over a week, Goodman posted an article on ESPN featuring inside information he learned from Ball about team turmoil in the Los Angeles Lakers locker room. According to Goodman's source, i.e. LaVar Ball, there is a lack of respect for head coach Luke Walton within the organization, and the team "doesn't want to play" for him.

The eldest Ball wasn't a fan of that getting released to the public.

“I sent Jeff Goodman home early,” Ball said. “Otherwise he would have still been out here. But how are you going to be out here if I won’t interview with you no more? You've got to come home.

“I’ll never ever EVER do an interview with that guy again. He’s sheisty, and I see that. He wanted to go that route," he continued. "He did the story he wanted to write, tried to finagle things,” Ball continued. “Guess what? He’s out of the picture now. He can’t come close to my family.” In the latest episode of Facebook's "Ball in the Family" documentary series, we got to see the event unfold, and the final product is hysterical.

How the tables have turned pic.twitter.com/lhZXp8EtkN

LaVar Ball certainly has his own issues, but seeing Goodman embarrassed on a reality show after being sent to Lithuania by ESPN is absolutely priceless. After all, whiney Jeff Goodman is the best Jeff Goodman. https://twitter.com/TreyHuntsmanKSR/status/970839104853245952 Big Baller Brand: 1 Jeff Goodman: 0 De'Aaron Fox: 39

After signing just one high school offensive tackle in the class of 2023, that is a major position of need in the class of 2024. Latest commit Aba Selm could help fill that need when the three-star recruit joins the Kentucky program, but more help...

Race will be tight for double byes at the SEC Tournament

Believe it or not, we are over halfway through the SEC season. All 14 teams in the league have played 10 conference games with just four weeks remaining in the regular season. The stretch run is here. In the Bluegrass, we've already been paying...

Entering the 2022-23 season, the two matchups between Kentucky and Arkansas appeared to be the biggest headliners of the SEC. Injuries put each team on the bubble early. The Cats have won their way off, for now, while the Razorbacks can't seem to...

With the Senior Bowl finishing up on Saturday, draft season is officially here. Over the next two-plus months, all eyes are pointing towards Kansas City for the three-day extravaganza that has turned into the best non-sporting event of the season....

One week after Kentucky came up short at home in a prime-time spot against Kansas, the Wildcats did not fail to finish the deal in front of a strong Rupp Arena crowd on Saturday night. Thanks to a solid offensive performance against a top-10 Florida...

And just like that, six straight wins in the Southeastern Conference for Kentucky, this time a five-point home victory over Florida inside Rupp Arena. Two teams known for their slow starts, it was the Gators falling short in that area on Saturday,...

No Oscar Tshiebwe, no problem. Because Kentucky had a Cason Wallace. Against Florida, it was Wallace who paced Kentucky in scoring with his 20 points on an efficient 7-of-10 performance from the field. More than a scorer, Wallace was a menace on...

If I had told you before the game that Kentucky would beat Florida despite only getting eight total points from Oscar Tshiebwe and Antonio Reeves, would you believe me? Kentucky's leading scorers struggled tonight vs. the Gators, but the Cats were...