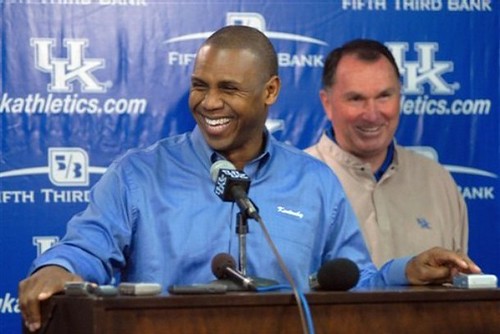 Let's keep this ball rolling, shall we? Tony Barnhart of the Atlanta Journal Constitution has a good article today regarding Joker Phillips and the direction of the University of Kentucky Football program. In it, Joker talks about taking the next step and getting to another level with the football team. Tony does a good job in capturing the essence of what Rich Brooks established by the time he left Kentucky. The main points include: 1) Running a clean program. 2) Recruiting SEC talent / establishing recruiting bases in "football" states. 3) Competing for a bowl game every year. 4) Beating Louisville consistently (on and off the field). A pretty decent set of accomplishments if one keeps in mind how the Brooks era started and the overall expectations of the fans. Considering the schedule next year (we avoid the three best teams in the SEC West), it doesn't seem like this upcoming season will regress on the established successes of the Brooks era. Since Coach Phillips talks about moving up from Brooks' core accomplishments, what exactly is he talking about? Let's compile a list of five attainable goals that Joker should focus on as the program moves forward: 1) Maintain The Talent. As a recruiter at heart, it shouldn't be hard for Joker to keep the priority on talent. With Charlie Strong revitalizing Louisville, winning the recruiting battle in the Bluegrass just became much more difficult. Keeping the Cards at bay with a recruiting stiff arm for local players is crucial to prevent a backslide in the program. Hometown heroes don't always measure up to other recruits in terms of talent, but their passion and energy help plug holes in spots where other recruiting efforts fail. 2) Beat Tennessee. We all realize that UT is weak and has been weak for the past few seasons. Unfortunately, UK has been unable to capitalize. One of the big stepping stones to establishing a more dominant program will be to provide a consistent threat to our border state rival (much like the way UT and Vandy has done against UK in basketball). That begins by getting the 'longest losing streak' monkey off our back and actually notching a 'W' against the Vols. 3) Beat Spurrier. No coach appears to relish beating down the Wildcats more than the human sun visor. His perfect record against the Cats is getting to be like the Undertaker's record in Wrestlemania -- an accomplishment that isn't as big a deal as it seems and needs to be broken if for no other reason than to humble the principle involved. Removing mental blocks and wacky anomalies are part of what distinguishes mediocre teams from good teams. 4) Finish First or Second in the SEC East. A partial result of #2 and #3 above, actually not being a doormat in the perennially tough SEC East is crucial if this program is to keep moving forward. UK has done well against the SEC West, but proving itself against division rivals would be a major accomplishment for the Phillips regime. The Brooks teams of the past were capable of beating better competition but susceptible to losing to lesser competition. Minimizing the troughs (by not taking lesser teams for granted and matching their enthusiasm/energy level) and maximizing the peaks (by consistently beating mid-level SEC teams) is the type of consistent play UK requires to progress. 5) January Bowl Games. Settling for any bowl is a particular mentality that doesn't jibe well with a team on its way up. A team with a winning mentality shoots for the BCS and will begrudgingly settle for an Outback/Capital One/Gator invite. UK is currently too happy just to get invited to the party. Using the 'aim small, miss small' mantra will have the additional effect of showcasing the team for better recruits which then feeds improvement cycle. Notice that I didn't mention beating Florida, staying ranked, or a plethora of other items that many people would like to see happen with UK. Those are things that need to happen in the final stages of making UK a great program. For now, for the purposes of moving the program forward, those five goals should be the focus of the coaching staff and players.