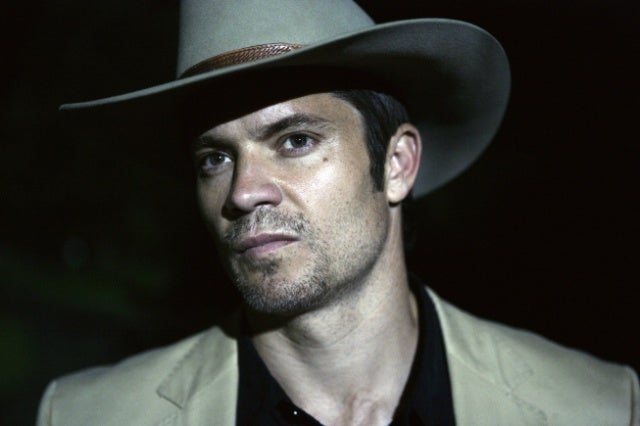 Good morning, my KSR brothers and sisters, and welcome to a jam-packed edition of your Wednesday News and Views.  With apologies to Billy Corgan, Test, Coco, Brandy from Joe Dirt and UK's own Scott Downs, these notes are being dedicated to Kentucky's big moment on the small screen Tuesday night - the premiere of Justified on FX.  For those of you who aren't aware, Justified is the story of a US Marshal (and Kentucky native) who is punished for his super hardcore outlaw ways by being sent back to Harlan from Miami, where he'll apparently battle Kentucky's only known inhabitants, the neo-Nazi.  In the first episode, there was a Lexington church blown up with with a rocket launcher, complete with special effects almost as advanced as the first Star Wars movie, a murder on a rural one-lane bridge called Tates Creek Road and a references to coal mines and your beloved Kentucky Wildcats (football edition).  As you might expect, after just 12 minutes of watching, I knew it was safe to declare Justified as the absolute worst television show ever made (Viva Laughlin not included, obviously).  However, after about 30 more minutes of shootouts and Kentucky stereotyping, I think I might have gotten hooked.  I found out tonight that I'm a sucker for Appalachian gun fights.  I'll probably watch next week and the week after that.  But, I fully expect Justified to be canceled right about that time, so I won't have to deal with this inner struggle anymore.  However, I expect serious issues for Harlan's tourism department to continue for years to come. Now onto some UK news..  (1)  The most buzzworthy note of Tuesday was the decommitment of 2010 power forward Luke Cothron from NC State and the apparent posibilities it leaves for Kentucky to rein him in.  The 6'8" power forward, ranked 33rd overall and as a four-star, will visit UK and Alabama (his home state school), while also considering UConn, Ole Miss and Tennessee.  While this is good news for the Cats in one regard, many NC State outlets are now reporting that this likely means they lead for CJ Leslie.  Who knows?  (2)  Great news for everyone who ran out and bought some new LeBron's when UK started wearing them.  The Cats got new shoes for the NCAA tournament.  Shockingly, they are made by Nike.  Not shockingly, they are a lot less goofy than Tennessee's new shoes.  This does remind me, though, that if Kenny Walker is reading this, I need a pair of those UK throwback shoes you have.  Let's talk.  (3)  Mirroring the men, as they seemed to do so much in their big-time season, the women's basketball team earned some post-season honors as Coach Matthew Mitchell and junior forward Victoria Dunlap earned top SEC honors.  Mitchell was named SEC Coach of the Year and Dunlap was SEC Player of the Year.  The Cats will look to continue their success on Saturday at Freedom Hall against Liberty.  As one of our fine commenters said, they'll look to beat down Liberty like a repressive government. (4)  In case you missed it earlier, make sure you check out Jason King's story on DeMarcus Cousins.  King, who wrote the fantastic Rivals piece on John Wall earlier this season captures Boogie better than anyone has to this point (or even tried to, for that matter).  Worth your time, for sure. (5)  In case you missed it on Monday or Tuesday, Rick Stansbury is still whining.  This time, it's over a lane violation.  You would think a call from Bruce Pearl saying that his team should have made it would make everything ok in Starkville.  I guess not. (6)  After flirting with first round NIT disaster, North Carolina escaped against William & Mary in a game played at Carmichael Auditorium, Carolina's equivalent of Memorial Coliseum.  The reason for the change in venue was renovations at the Dean Dome, but be certain when you're watching ESPN give UNC students props that if they were in the Dean Dome and not Carmichael, it would be horribly embarrassing.  The fan support is truly pathetic there right now.  Renovations saved them further embarrassment.  (7)  If you hate tradition, then the NCAA tournament started tonight when Arkansas-Pine Bluff beat Winthrop in the play-in game.  The most incredible part about the Pine Bluff story is that they started the year 0-11, but I'm sure you knew that already because you read this.  Right?  Anyway, for those of you wondering, the Cats would not face the Golden Lions until the Final Four. That's it for now.  Stay tuned throughout the day as we get you all set for ETSU and an entire slate of Thursday NCAA games.  And, remember, if you're heading to Harlan, take your AK-47.  You're going to need it.  See you in a few...