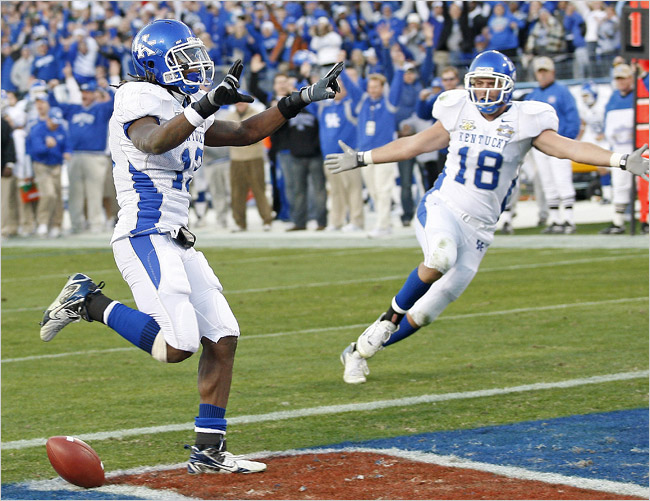 Stevie and Tamme celebrating how awesome they are going to be in the NFL.

When Calipari took over, we knew there would be a lot of Kentucky players making noise in the professional level someday soon.  But the old guard hasn’t decided to let the one and done’s take all the Kentucky pride, and some of the football players have been getting into it now too.

A look around the leagues at big numbers put up by Wildcat Alums.

-Nazr Mohammed, a name you thought you might not hear about in the NBA again after he got traded to the bobcats.  But freshmen weight be dammed, Nazr put up 22 points and pulled down 20 boards in a loss to Utah yesterday.

-If we wanted to, we could probably write a post every day about the ridiculous amount of assists Rajon Rondo gets on a nightly basis.  (Who am I kidding, we totally do.)  But Rondo once again had a double double as he finished with 11 points and 17 assists last night in a win over the grizzlies.  The numbers are actually right on his average, as he is currently averaging a double double with around 11 points and 15 boards per game.

-In the world of the pigskin, Jacob Tamme is making the most of the opportunity he was given.  As Doyel put it earlier today, ‘Tamme is playing like an pro-bowl tight end.’  Certainly the beneficiary of a great QB, Tamme finished as the Colts leading receiver with 7 catches for 73 yards.

-Stevie Johnson has also been making waves and racking up the fantasy points.  He get the ball thrown his way as much as he has been today, but Johnson did complete 3 catches for 37 yards, and his Bufallo Bills scored their first win on the season.  Needless to say, Ryan Fitzpatrick is no Peyton Manning.

-While he may have been moved to the D-League, Patrick Patterson is taking no time off.  In his debut D-League game, Patterson scored 15 in a loss to the Iowa Energy.  I tried to look up the full box score on their website, but I’m pretty sure Hubby designed it, so it’s impossible to find anything.