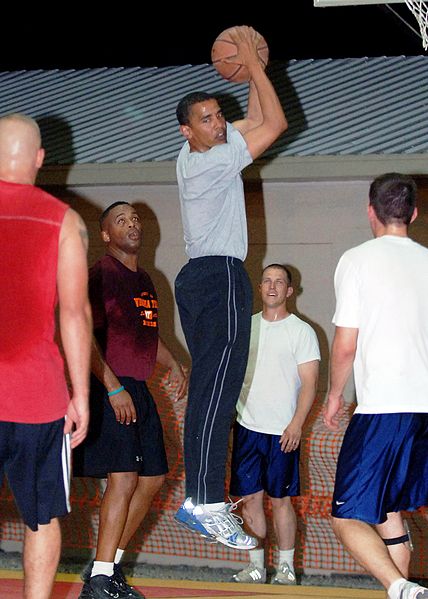 As you read this, Barack Obama is getting inaugurated as President of the United States. During the campaign, he very nearly became part of Kentucky basketball lore with a pick-up game against former Cats. I wrote about it a few weeks after the scheduled event and with the inaugural in full gear, here is the post reprinted again to tell the story. And yes, I am still upset. We are now far enough away from the event itself that I can tell this story. It still is tough to talk about, because I was so close to what would have been a pretty amazing day for me. But alas poor Yorick, close but no cigar. Just a few short weeks ago, on the morning of the West Virginia primary, one week before the Kentucky primary, Barack Obama was going to play basketball at UK, with a group of former players and a couple of other folks, one of whom was going to be me. Obama likes to play basketball on the morning of elections. He was going to be in Louisville the night before, and thus on the weekend prior to the Tuesday primary, I was contacted about getting our Barnstorming Group to play basketball with him at the Craft Center. This was a top-secret mission, as the Secret Service folks did not want anyone knowing Obama played until it was over. Thus no media were going to be told until after the fact and one camera would have filmed the festivities and released the footage to the media at the end. The game was to take place at 7 am and we would all be searched before entering the premises. I was recruited to round up our Barnstorming guys and some other older players were also going to take the court. As of Sunday evening, here was the scheduled basketball lineup: Barack Obama Joe Crawford Ramel Bradley Bobby Perry Woo Kenny Walker Cedric Jenkins Derrick Hord Julian Bond (former Louisville player) Matt "Too Tall" Jones Others were going to be around as well and potentially would have played, including Ben Chandler. When I got the news on the weekend, I immediately called the Barnstorming guys who could not have been more excited. Ramel, Joe, Bobby and Woo were thrilled at the prospect and all of them could not believe it might happen. As anyone who reads this blog knows, I am a huge Obama guy and I was literally freaking out. Combining my favorite politician of my lifetime with UK basketball and the chance to play in the Craft Center....well it doesnt get better. I also thought it would be great publicity for the school and the program and would make for a story of a lifetime. We all talked about what we were going to do during the game. Joe said he just wanted to make one three on Obama, Ramel said he wanted to talk to him about Brooklyn and Bobby just wanted an autograph on his book. I wondered who out of that group I could possibly guard, and only a sweat-panted Obama seemed likely.....which made me practice my likely shout if I blocked his shot....."Oh NO-BAMA!" Alas, like so many things in life, it didnt happen. A late vote got called for in Washington for Tuesday that Obama had to attend and by 5 o clock on Monday, the event was cancelled. The players were disappointed, the event coordinators apologetic and I was crushed. I already had the office picture mounted in my mind the picture of me guarding the man from Illinois with Woo playing help defense and Cedric Jenkins coming in for the tip. However it didnt happen and the dream may have died. Nevertheless, it was good for a couple days to have the excitement of possibility. If nothing else, the whole experience was worth it for one cool moment, when I told Woo about the possibility of the game, he said, "when I was a kid in Poland, I would have never dreamed I could play basketball with the future President of the United States. This is a great country." He is correct about that.