Chad Lashbrook
The 144th Kentucky Derby will take place on May 5th, a little over 80 days from now.  There are basically two more rounds of significant prep races that will take place between now and then in key winter racing states like California, Florida, Louisiana, Arkansas, and New York.  We will compile a ranking of the top 8 contenders for the Run for the Roses after each round of preps and once more after the post position draw on the Wednesday prior to the race.  Here is your inaugural Elite Eight for 2018: [caption id="" align="aligncenter" width="710"] 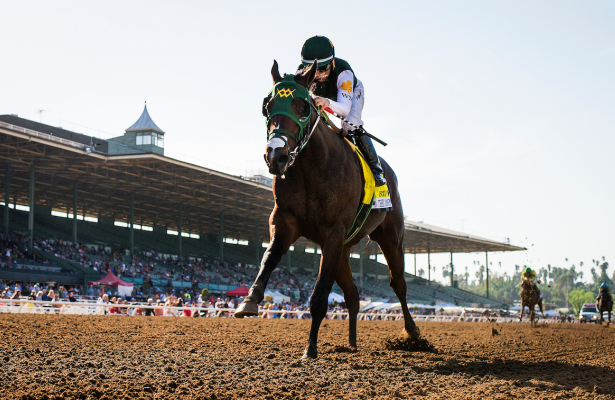 Bolt D'Oro - Image via horseracingnation.com[/caption] # 8 - Mitole is the long shot of this group and a definite reach to be included on any Derby watch report.  He has only a 6 furlong maiden win to his credit, but the manner in which he thoroughly dominated his competition, running 1:09 and change en route to a 96 Beyer is certainly noteworthy.  He'll likely only have 2 opportunities to stretch out and earn enough points to qualify, but in the capable hands of Steve Asmussen anything is possible. # 7 - Instilled Regard left the deep waters of southern California after the dramatic finish in the Los Al Futurity and shipped to Louisiana where he easily dispatched a full field in the Grade 3 Lecomte.  The Arch colt has one of the deepest pedigrees of any horse on this or any other watch list.  The "Big Easy" win should serve him well as a confidence booster when he returns in the Risen Star this coming Saturday. # 6 - McKinzie has a perfect record thanks to the stewards at Los Alamitos.  While his Grade 1 "victory" was given, not earned, he did battle Solomini and Instilled Regard gamely to the wire in just his second lifetime start.  The colt certainly has some fight in him, and you can bet that Baffert will get every ounce of it out of him. # 5 - Avery Island, by 2007 Kentucky Derby winner Street Sense, owns the only 9 furlong stake victory in this group.  His handily defeat of Grade 1 winner Firenze Fire in Aqueduct's Grade 3 Withers was the first prep of 2018 to extend beyond a mile and a sixteenth.  The Derby distance will most likely not be an issue for the Kiaran McLaughlin trainee, but he will definitely need to step his game up against tougher competition as the road to Derby 144 narrows over the next two months. # 4 - Audible owns the most impressive victory of 2018 thus far, a dominating win in very good time against a highly regarded field in Gulfstream Park's Grade 2 Holy Bull.  That effort took his lifetime record to 3 for 4, and he certainly appears to be improving with every start.  His pedigree does not exactly scream 10 furlongs, but the talent is definitely there. # 3 - Solomini is ranked lower on many other Derby watch lists, but he is a very solid 3rd in the Elite Eight.  He has only been beaten by two horses in his career - the two ranked ahead of him on this list.  The Zayat stables color bearer was a clear runner-up behind the champion Good Magic in the Breeders' Cup, and then came back to cross the wire first in the Grade 1 Los Al Futurity.  The two primary rivals he BEAT that day both came back to win - McKinzie took the Grade 3 Sham at Santa Anita while Instilled Regard shipped to New Orleans to capture the Grade 3 Lecomte.  The son of Curlin spiked a fever and missed a few days of training earlier this year, but had a solid half mile drill at Santa Anita this past week and should have no problem getting in two strong preps prior to the Derby. # 2 - Good Magic is really more of a 1b in this spot.  The reigning two-year old champion's Breeders' Cup Juvenile victory was ultra-impressive.  The Curlin colt sat a perfect stalking trip, hit the front at the top of the stretch and pulled away from the field with authority.  It was his first start around two turns after two runner-up finishes, and the added distance certainly played to his strengths.  He has been training steadily at Palm Meadows for Chad Brown and will make only 2 starts prior to the Derby as Brown is one of several trainers subscribing to the increasingly popular "less is more" theory when it comes to racing the horses in their care.  Good Magic is currently pointing to the Fountain of Youth at Gulfstream on March 3rd. # 1 - Bolt D'Oro entered the Breeders' Cup Juvenile as the odds-on favorite after beginning his career 3 for 3 with a pair of Grade 1 victories to his credit.  He endured a very wide trip all the way around the race track after bobbling at the break from post 11 to finish a well-beaten 3rd behind eclipse award winner Good Magic and the hard-knocking Solomini.  The strength of his 3 prior victories combined with the fact that everything seemed to work against him in the Breeders' Cup are reason enough to believe that he is still the best of this crop.  A minor setback forced him to miss some training time, but he is now back training regularly with 3 solid works under his belt. Trainer Mick Ruis currently has the Medaglia D'Oro colt scheduled to make his first start this year in the March 10th San Felipe at Santa Anita. [mobile_ad]