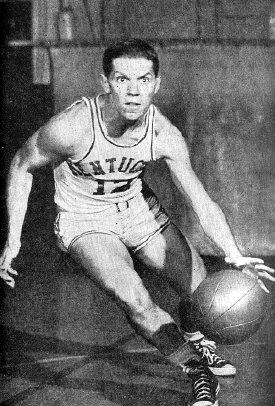 One of the true legends of Kentucky basketball has passed away. Ralph Beard passed away today in Louisville, Kentucky at the age of 79. Beard was one of the greatest to ever put on the Blue and White, helping lead the Cats to their first two national championships in 1948 and 1949. He was a CONSENSUS First Team All American for three seasons, the only Kentucky player to ever accomplish that honor. Beard was a key member of the legendary "Fabulous 5" team that was the first true nationally known college basketball "super team." Beard also was Captain of the 1948 USA Olympic team, bringing home the gold medal to go along with his collegiate honors. His NBA career was cut short by his role in the point-shaving scandal that rocked college basketball and led to his ban from the professional game. Those who saw Beard play remember him as one of the first athletic players to use his skills to take the ball to the basket and open up the game to a much more up and down affair. Beard finished his career as UK's all-time leading scorer and even now, after the days of Freshman eligibility and the three point shot, he sits 14th on the all-time scoring list. One of the true greats in UK history, Ralph Beard. He will be missed.