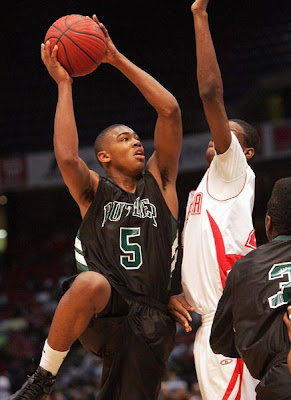 Trevor Lacey, a 6-foot-3 shooting guard from Alabama, will not commit until the winter. While there have been rumors swirling around that the star shooter was ready to commit to Auburn, that is not the case. While he has been looking at the same schools for a while, it appears that the main ones are Alabama, Kentucky, Auburn, Kansas, Tennessee, Memphis and Georgia Tech. He hopes to make an official top five in the coming weeks and ultimately make a decision around Christmas time. Trevor really likes Kentucky's style of play and coaching staff. They have been considered as a favorite and potential landing spot. Amir Williams, a 6-foot-10 center from Michigan, has not been in the news very much as of lately. The last tidbit of information we know about Williams is that he took an unofficial visit to DePaul a few months ago. Other than that, he has not cut his list down or taken anymore visits to knowledge. Arizona, Cincinnati, Duke, Florida, Kansas, Kentucky, Miami, Michigan, Michigan State, Minnesota, North Carolina, Ohio State, Pittsburgh, Purdue, Tennessee, Texas, USC, Wake Forest and Wisconsin are a number of programs who have either offered or shown interest towards Amir over the past few years. Perry Ellis, a 6-foot-8 forward from Kansas, finished up his second of five unofficial visits for the fall. Ellis is enjoy a visit to Oklahoma for the football game against Florida State. Among other Kentucky recruits there were 2013 stars Andrew and Aaron Harrison, as well as Julius Randle. Perry will take visits to Kansas State and Memphis before attending Kentucky's first basketball game in November. Austin Rivers, a 6-foot-3 shooting guard from Florida, still has not setup an official visit to Kentucky. While some believe he is still considering the Cats, it appears they are most likely out. Rivers, the top shooting guard in the nation, has setup official visits with the four teams he is considering. They are Florida, Duke, North Carolina and Kansas. Rivers, a former Florida Gators commit, will take his first official visit starting in October. DeAndre Daniels, a 6-foot-8 forward from California, is still consdering Kentucky. Now that he is remaining in the class of 2011, Daniels has enrolled at IMG Academy in Florida. Originally, DeAndre was at the Taft School in California. Now, the former Texas Longhorns commit, has made a list... sort of. His AAU coach from the Belmont Shoreshots gave a list of Texas, USC, UCLA, Washington, Cal, Kentucky, West Virginia, NC State and esentially everyone else. Follow Alex Kline on Twitter & Check out his new site.