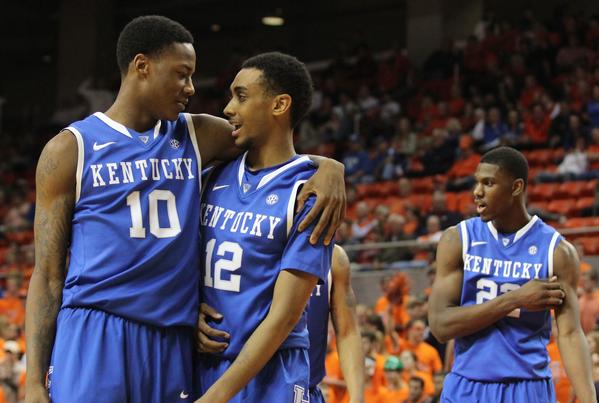 Kentucky not only snapped a two-game losing streak last night with a win over Vanderbilt, but they also-- at least momentarily-- revitalized the hopes and spirits of the Kentucky faithful. Perhaps even more importantly, Kentucky kept its NCAA tournament hopes alive. A new sense of fight, a few rounds of Dodgeball, inspired team play, and an improved Willie Cauley-Stein all factored in to the equation that helped Kentucky push past Vanderbilt in a must-win game. The other key area of improvement that many people have been talking about, which we haven't seen much of in the past month or so, was the strong performance from both members of Kentucky's guard duo: Archie Goodwin and Ryan Harrow.  Last night Goodwin and Harrow combined for 65 minutes, 28 points (on 13-23 shooting), 11 rebounds, 7 assists, and only 2 turnovers. The two both played arguably their best game in nearly a month. Harrow had all but disappeared during the last few games, barely showing up on the stat sheet. Goodwin made his presence known, but often for the wrong reasons: forcing shots, passing up opportunities to feed the ball to his teammates, turning the ball over, etc. After last night's solid performance by Goodwin and Harrow, I decided to take a look at how the team has performed when the duo are playing well at the same time. Much has been made of how this Kentucky team will live or die, succeed or fail, reach potential or fall short of expectations, all based on the play of Alex Poythress. Although I still agree that we will never really know the ceiling of this team without Poythress consistently playing at a higher level, the play of Goodwin and Harrow tends to predict the outcome (win or lose) for this team much more so than how Alex Poythress plays. Due to his absence for a stretch during the beginning of the season, Ryan Harrow and Archie Goodwin have only played together in 22 games. The results and stats will only be factored in for those 22 games. - When Archie Goodwin and Ryan Harrow combine to score 20+ points, Kentucky is 12-2.  - When Archie Goodwin and Ryan Harrow combine to score LESS than 20+ points, Kentucky is 3-5 - In Kentucky's 15 wins with both Goodwin and Harrow playing, the 2 average 24.3 ppg combined - In Kentucky's 7 losses with both Goodwin and Harrow playing, the 2 average 14.0 ppg combined - In 3 of Kentucky's worst losses of the year (Notre Dame, Florida and Tennessee), Goodwin and Harrow combined scored 3 points, 8 points, and 7 points.  - In a close loss to Louisville in which Kentucky actually played fairly well, the 2 combined to score 39 points - In Kentucky's 15 wins with Goodwin and Harrow playing, they have combined to score AT LEAST 15 points (Auburn)   When looking at a number of other statistics to try to find similar trends (Wiltjer's number of shots in each game, Wiltjer's total points in each game, Poythress' total points in each game, Poythress' number of shots in each game, Julius Mays' assist totals in each game), none of the other trends played out as strongly as the trend of Kentucky's success when both Goodwin and Harrow are playing well at the same time and scoring 20+ points combined.  If Kentucky has hopes of not only making the NCAA tournament, but also making any kind of a run at all in the tournament-- Archie Goodwin and Ryan Harrow playing well at the same time will likely be one of the biggest factors. Kentucky's most important duo: Archie Goodwin and Ryan Harrow Kentucky's second most important duo: Willie's headband and Cal's lack of a tie