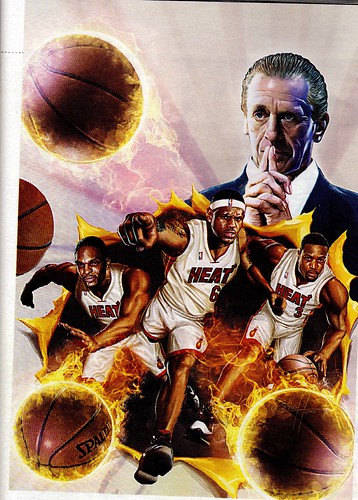 So. That whole Bulldog thing happened and UK lost. We are now 4-5, but with 3 winnable games ahead on the schedule that would put the Big Blue at 7-5 with a shot at a decent bowl. I know that seems like a consolation prize, but if we go to a bowl in the same season we beat Louisville, Spurrier, and Tennessee. . .well. . .that is definitely something to shoot for and something of which this team could be proud. We'll cap the night off with the last relevant UK picture from the ESPN tutorial. It shows my favorite former Wildcat, Pat Riley, in the puppetmaster role over the Heat. I don't know what you all think about the team with a former UK player as GM, former UK player on the roster (Magloire), and star player with connections to Calipari (James), but I'm all in. I know the hate directed at Miami involves LeBron and his approach to leaving Cleveland, but I'm not going to join in on the hype. I don't know what is so hard to understand about a guy that is choosing to live in a great climate and work with his friends. If we all had that option, we would do it, right? Heck, I know I would. Give me South Beach over northeastern Ohio any day. That is what we call a no-brainer. I'll be rooting for the Heat (as well as the Kings, Rockets, Celtics, and any other haven for Wildcat players) and I hope they do well. Feel free to discuss the football situation or ramble about the NBA or even dream about the basketball season in the comments. Regardless, I'll be in the Purple Lot on Saturday ready to cheer on the Cats and hope for a winning sweep to the end of the season. Go Cats.