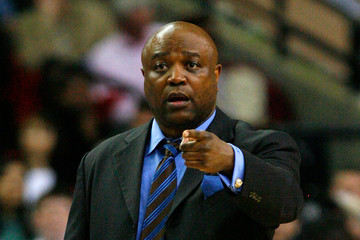 When it comes to the recruitment of Andrew Wiggins, it's Kentucky and Florida State, and then it's everyone else. The two schools are ahead of the pack in the race for landing a commitment from the top prospect in the class of 2014. So when Florida State head coach Leonard Hamilton showed up in Atlantic City last night to watch Wiggins, and no one from Kentucky's staff was in the building, he probably thought he had a leg up on UK. But there was a problem. Andrew Wiggins wasn't there either. Wiggins decided to sit out the three-day "Live In A.C." AAU tournament to rest and hang out with family after the grueling July schedule wore his body out. His CIA Bounce team won its first game in overtime without him, so at least Leonard Hamilton got to see some good basketball. Now, being the UK homer that I am, I'm going to spin this to where it sounds even better for Kentucky fans... What if Andrew Wiggins gave Cal or Orlando a heads up via text that he'd be sitting out, but didn't bother telling Leonard Hamilton? I don't think it's a coincidence UK chose to skip this AAU tournament when Wiggins was originally scheduled to play. If Wiggins is playing anywhere on planet Earth this month, you better believe Cal, Antigua, or Kenny Payne will be there. And how awkward was that for Leonard Hamilton? Sure, there are plenty of other good players for him to watch in Atlantic City, but he was in town to see his top target. I'm sure he played it off well: "Yeah, I knew he was sitting out. We talked. I just came up here because I really like the buffet and the ambiance at Trump Taj Mahal. Wait... You don't think I came up here to see Wiggins, do you? Come on, man. I knew he was staying home. I'm up here for the buffet. Angelhair, pizza and crab legs, baby!"