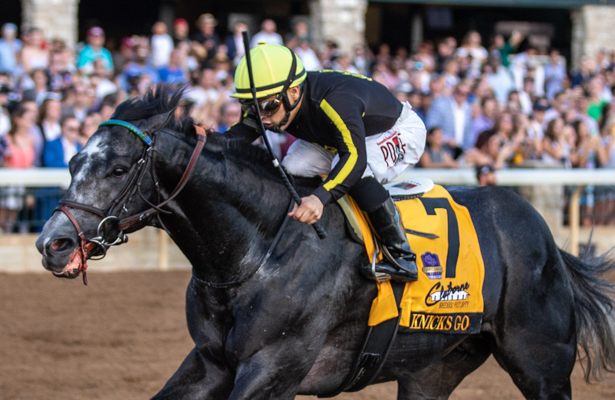 Knicks Go captures the Breeders' Futurity at 70/1 for trainer Ben Colebrook's first Grade 1 victory. Photo courtesy of Horse Racing Nation.[/caption] Knicks Go paid $142 to win for his Breeders' Futurity victory, and Next Shares returned bettors $48.80 on $2 win wagers to fuel an all-stakes pick 5 that paid out over $130,000 for the fifty cent minimum bet at Keeneland on Saturday.  In the midst of the hysteria, we were able to identify two profitable plays as Positive Spirit finished second in the 5th race and Golden Mischief took the Grade 2 Thoroughbred Club of America Stakes.  The positive returns on those two wagers covered most of the losses on the exotic plays, and we finished the day down $11.50, which leaves a net loss of $10 thus far for the meet.  Sunday's card offers three more stakes races, all of which are Win and You're In preps for their respective Breeders' Cup divisions. Sunday, October 7th - Race 6, the Indian Summer Chelsea Cloisters will most likely go favored in this prep for the Breeders' Cup Juvenile Turf Sprint.  She blew away a maiden field over the main track here in the spring and then shipped across the pond where she disappointed as the favorite in the Queen Mary at Royal Ascot.  Wesley Ward ran her back in 13 days off that poor effort, and she yielded in the late stages to finish in the runner-up spot in the Group 3 Prix du Bois at Deauville.  Most recently, she was second past the wire again back in the states at Saratoga behind her stablemate Stillwater Cove.  The daughter of First Samurai has the speed to set the pace from her rail draw, and she has an experience edge on most of the field.  She is the one to beat.  All About It made a very strong run from just off the pace to miss by a neck in his debut at Saratoga.  Fog of War, the winner of that race, came back to take the Grade 1 Summer Stakes at Woodbine in his next contest.  All About It adds lasix for his second trip to the post and looks like a very formidable challenger in this spot. Wager: $5 exacta box with Chelsea Cloisters and All About It; $1 trifecta box with Chelsea Cloisters, Credit Swap, and All About It Race 8, the Bourbon Stakes Fourteen juveniles head to the post to challenge for a spot in the Breeders' Cup Juvenile Turf in the Grade 3 Bourbon.  War of Will led deep into the stretch and just missed victory by a half length in the aforementioned Summer Stakes in his last start.  Though still a maiden, he certainly deserves a long look in here based off that effort.  Henley's Joy is 2 for 2 after breaking his maiden at Ellis Park and taking the Kentucky Downs Juvenile for Mike Maker.  Tyler Gaffalione stays aboard the son of turf stalwart Kitten's Joy.  Concrete Rose earned a solid 82 Beyer figure for her debut victory over good turf at Saratoga in which she bested next-out winner Introduced by a length and 3/4 on the line.  Tracksmith was a mere head behind Henley's Joy at Kentucky Downs.  Mick's Star is bred for the lawn and has two blow-out victories at Indiana Downs to his credit. Wager: $0.50 trifecta box with War of Will, Henley's Joy, Concrete Rose, Tracksmith, and Mick's Star Race 9, the Spinster Eskimo Kisses put forth a career best effort when dominating the Alabama at Saratoga in her last go.  She cuts back in distance for this Breeders' Cup Distaff prep and owns two second place finishes over the Keeneland surface.  Blue Prize will take some money as she has won her two most recent outings, both in graded stakes company at Churchill Downs.  However, Julien Leparoux, the winning pilot in her Locust Grove victory in Louisville three weeks ago, chose to ride Talk Veuve to Me this afternoon.  The daughter of Violence set a fast pace and faded badly to finish 4th, beaten 7 lengths by Eskimo Kisses in the Alabama.  She has been training well at Keeneland since, and she will appreciate the turn back to 9 panels today.  Her tactical speed will give her the jump on the major competition. Wager: $15 WPS on Talk Veuve to Me Best of luck to everyone, enjoy another beautiful (and HOT) day at Keeneland.  You can follow me on Twitter @chadlashbrook.