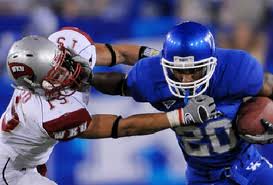 Get off me, punk. My internet connection is down to a trickle tonight and I can't figure out why. Some would say it is because I am simulcasting a World of Warcraft raid on the Undercity while keeping a live UStream of Ice T's wife CoCo trying on hot pants in the background, but I refuse to believe such things. It is clearly Time Warner's fault and, despite my background in IT, they won't listen to reason. Anyway, I did find a few cool previews of the football game this Saturday. The Atlanta Journal Constitution has the entire slate of SEC match-ups along with the players to watch in each game. UK is in the top 25 in 6 nationally ranked categories, but. . ugh. . .we are last in the SEC in red zone defense? Look for that stat to improve against the rebels. Speaking of defense, Joker thinks the reason Trey Burton looked like the second coming was due to UK's poor tackling. Speaking for the contingent of people watching the game at The Cellar on Saturday, I would have to agree. Florida was shedding Wildcat defenders like they were exoskeletons and I can't remember the last time I saw so many low dive-shoulder first-head down attempts at tackling (which UF athletes just hopped over) since Mike Major prowled the sidelines. Tackling. Its FUN-damental. Let's wrap this up with a line, shall we? The sharps place the early betting at Ole Miss at -3. Seems like a safe line for any evenly matched SEC teams and one the home team should generally get. This guy in particular thinks that Mississippi can't match-up with the Wildcats athletes and says to put your Monopoly money on the Big Blue. I say save your money and put it toward a second order of wings or a John Wall shot. That way, everybody is a winner.