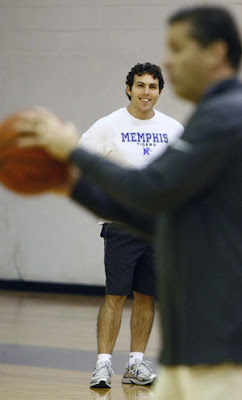 John Calipari's hiring at Kentucky and subsequent world tour of marketing, recruiting and pizza selling provided UK fans with thousands of storylines to follow. One of the most interesting, though, has been the continued link between UK and Cal's former employer, the University of Memphis. While most headlines pairing the two institutions together involve battling in recruits' homes or Dan Wolken getting his Ed Hardy shirt in a wad, tonight's storyline is purely on the hardwood. When 13-4 Memphis takes on 11-5 UTEP tonight at The House that FedEx Bought, they will look to pass Kentucky for the most consecutive conference wins. The Tigers are currently tied with a historic group of Wildcats at 64 consecutive wins and all that stands between them taking the top spot is Derrick Caracter's mohawk. Obviously, in Memphis, this is a massively huge story because the traditionally second-tier school has a chance to ascend to the top of something.  And, of course, there's the whole Calipari now being at Kentucky factor.  But, what about here? I don't think anyone here seems to really care. Kentucky is a school where records are as common as the change in your sofa and this one, for whatever reason, hasn't seemed to really stir up any emotion in the UK fanbase.  Personally, I've seen this stat dating back to last seasons and not once thought to myself "Dammit, those Memphis Tigers better slip up against one of those mighty Conference USA opponents".  Maybe I'm just a terrible fan.  Or, maybe, it doesn't bother me because the guy responsible for 61 of those victories is now pacing the UK sideline.  Either way, I'm surprisingly indifferent to this Memphis feat. What do you think?