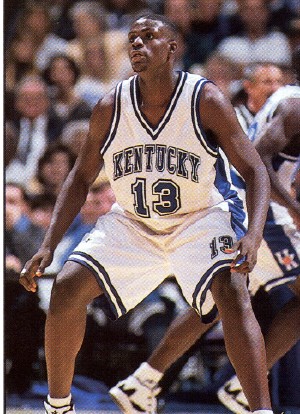 A week from Saturday, the 1996 UK National Championship will get together for a reunion game against a team of John Calipari Fantasy campers. Some will be old and washed up, others will be in decent shape, but none of them will wow the crowd with their game because it has been years since they played professional basketball. Well, all but one. Nazr Mohammed is still out there going strong, almost a decade and a half after leaving Lexington. Mohammed will be suiting up with Marquis Teague and the Bulls in 2012-13 for his 15th season in the league, after spending a season and a half with Kevin Durant and Friends in Oklahoma City. He averaged 14 minutes per game in his 87 games for the Thunder and ALMOST won his second NBA ring last season, until LeBron happened. On Wednesday, he turned 35 years old -- that's ancient in NBA years -- but that hasn't slowed down his pro career one bit. (Well, maybe a little but he's still out there gettin' buckets.) So lift your glasses to Nazr this evening/morning and toast to his incredible 14-year NBA career and wish him many more to come. And if you see him, give him a day-late Happy Birthday and tell him he's only seven NBA seasons away from tying Robert Parish. Happy Birthday, Nazr.   News and Views...

It was a hot and humid day in Lexington but that didn't keep the Cats from putting the pads on and hitting the practice field to get ready for Kent State. The humidity came out to play at the Nutter training facility and it really took its toll on the players. After practice, Joker Phillips said his guys did a good job of fighting through it, while battling a bug going around the team. “A little hot today and the guys tried to push through it,” Phillips said. “We have to make sure that we are taking care of our bodies at night and getting our rest. The guys really did try to push through it. We have to go. We don’t have time to worry about heat or worry about a bug.” Kyle Tucker tweeted that some of the players were vomiting on the field during practice. The guys better get it out of their systems now because there is a football game to play in just a couple days.

Get ready to see some fresh faces on the field for the defense on Saturday. The plan is to keep the schemes simple to allow the inexperienced freshmen to go out there and make plays. "There are going to be some guys out there playing even younger than were out there against Louisville," he said. "We are going to simplify and let the guys line up and play where the adjustment is very minimum." Linebackers Khalid Henderson and Pancho Thomas are two guys Joker said will see playing time against Kent State. Henderson, the four-star linebacker who originally committed to Tennessee, has been getting reps with the first team this week in practice. Look for some new youth in the secondary too.

Boone's Butcher Shop Injury Report: --- Safety Glenn Faulker is still 5-6 weeks away from even being considered for playing time. Redshirting is still an option if they feel that bum ankle can't heal in time for him to contribute. --- Running back Josh Clemons will sit out again this week. He is listed as week-to-week. --- CoShik Williams and Josh Forrest are wearing red jerseys in practice but will play against Kent State.

If you're interested in attending the game, tickets are ridiculously cheap online. If ticket availability is any indication of how the turnout will be, the Cats should be ready for a very thin crowd in Commonwealth Stadium for the season opener. It's not going to be pretty.

In basketball news, we received the unfortunate word from Andy Katz that Andrew and Aaron Harrison will likely visit Maryland for Maryland Madness. Coach Cal and the staff were really wanting to bring the Harrison twins in for Big Blue Madness, so it's quite the blow to recruiting. Dave Telep said a week ago that Maryland's stock was rising and this only backs up his report. KSR still believes UK leads, but the lead isn't what it was three weeks ago. Boycott Under Armor????

Texas Tech athletic director Kirby Hocutt revealed Wednesday that Billy Gillispie received a "zero tolerance" warning back in January when the school had to report secondary violations from the men's basketball program. The recent accusations would be a violation of that "zero tolerance" policy and Texas Tech is working to make a decision on Billy G's future with the program. “We’ve got some serious issues on the table that we’re working through,” Hocutt told the Lubbock Avalanche Journal. “What the end result is, I don’t want to speculate. I can’t get ahead of myself here. We’ve got to take it day by day, step by step. We will get to the right place.” Not looking good for Ol' Clyde. Not looking good at all.

Ricky Ledo, a name many Kentucky fans are familiar with, is ineligible for the 2012-13 season at Providence. That kid had trouble written all over him.

Approximately 60 people showed up in Lexington to rally against the coal industry and its sponsorships with UK Athletics. Good job. Good effort.

Jerry Jones is a BOSS. Tyler Thompson is the same way.   See you all back here at 9:00 AM.