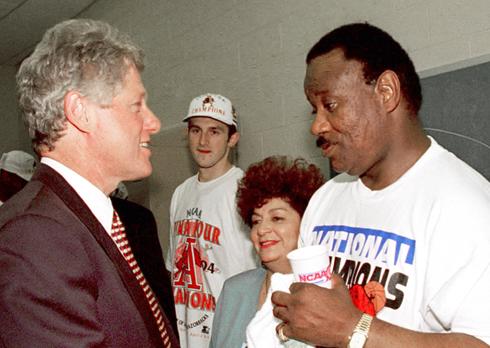 With his seat getting hotter with each passing game, former Wildcat and current Arkansas coach John Pelphrey got a little bit of unsolicited advice from the ghost that still haunts his program.  Former Razorbacks head coach and current crazy man Nolan Richardson told local reporters that in order for Pelphrey to get the program back on track, he needs to "feed the monster" that is the Hogs' fanbase with some significant victories.  It appears that tonight would present one such opportunity. An excerpt from Arkansas Sports 360:

“You create that monster, now you’ve got to feed it. Sometimes you run out of food and he’s hungry. That’s what is happening now. He’s hungry for it.”

Despite his increasing resemblence to Tracy Morgan's homeless character on SNL, the core of what Richardson is correct.  Arkansas needs to become the program that they were in the early and mid-90s.  It's better for the SEC and every team in the conference when the Hogs are winnning.  Despite some successes in the last decade by a few teams from the SEC West, the division has lacked a consistently strong program to balance out the conference and give the nation another reason to take them seriously.  Plus, it's one of the few programs in the conference that can count on its fans being passionate every season.  If it's not Pelphrey, it has to be someone.  The Arkansas game should be an annual slugfest.

That being said, that's a painfully boring post.  I'm more interested in hearing your captions for the picture above.  That's a conversation I'd love to have been a part of.  And it wouldn't surprise me if "feed the monster" was included.