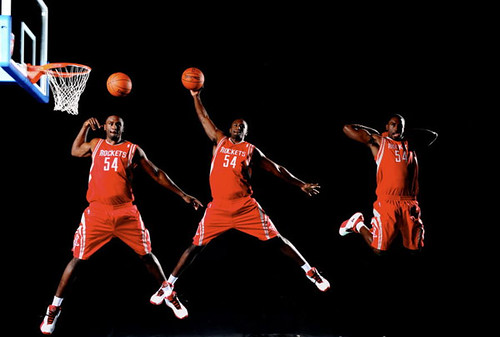 Peak a boo! Yeah, I know. Bad joke. Sue me. There are a few articles out today regarding Patrick Patterson and his endorsement deal with Chinese-based business Peak Sports Products. Should I make the easy joke of Patrick trading one Great Wall for another? Nah, let's just move on. Patterson is the 13th NBA player to endorse the Peak brand and the third current Rocket, but Patterson has a twist: He is going to be the first face of Peak America as the company seeks to expand into the land of apple pie. The endorsement synergy hit a crescendo this week because the Rockets are in China to play some exhibition games against the New Jersey Nyets. I like the company press release and this part in particular:

Patterson, who just reached 20 years of age, was the freshman selected by Houston Rockets in the first round of the No.14 pick. Graduated from the University of Kentucky, a famous NCAA university, he was accredited as one of the top power forwards in the draft this year and was, considered by many experts, the rookie who would adapt to NBA games within the shortest time.

I don't know if I have ever heard UK described as 'famous', but I like it and just hope it doesn't go to Mitch Barnhart's head (you know he has an inner diva just waiting for an excuse to shine). Of course, if you are wondering why Patrick is endorsing a shoe company in China (and why at least 8 other Rockets have at some point in time as well), you need look no further than the big fella with the achy legs they have playing center. The Houston Chronicle details the genesis of this phenomenon and how popular Houston players are in China simply because they are in Yao Ming's orbit. Additionally, with the expansion into America, there is a possibility you could purchase a PP endorsed shoe in the near future without having to get Fake Gimel to mine the back alleys of the internet black market. You know, sometimes stuff just works out. I was a little dismayed at how far Patrick fell in the draft, but he did end up going in the lottery portion. After awhile you realize he is on a solid team with a great GM that values the work ethic of players like Patterson (paging Mr. Hayes. . .). Now this type of news comes in and the income disparity (based on his fallen draft stock) will probably take care of itself. I don't know what it is exactly worth to be popular in China, but with that many people buying shoes, I'm sure it is a hefty paycheck. I couldn't be happier for Patrick considering all that he did for the University of Kentucky and we all wish him well.