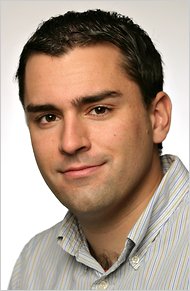 Pete Thamel took a break from trying to take down student-athletes at the University of Kentucky to try to take down a student-athlete who is having troubles down in Baton Rouge. "Endangered," an SI cover story on Tyrann Mathieu, was released this week, and, well, it may not exactly be true.  At least one person involved has come forward to say Thamel bribed him into saying things about the Honey Badger. "This guy from Sports Illustrated, he tried to, first of all, bribe me, so he offered me $2500 just to say things that didn't take place," a club promoter told Channel 2 news. Uh oh. That's not good for the Thameltoe. And then there is Thamel's trespassing and repeated phone calls to the Mathieu family, after they warned him to stay away:   “They called from blocked numbers repeatedly, asking me why I was dodging them,” Tyrone Mathieu said.  “They came to my home and that of my elderly mother on multiple occasions.” Tyrone Mathieu hired a law firm last week to attempt to stop SI’s interview requests.  The letter from Irpino Law Firm in New Orleans is addressed to Peter Thamel and Sports Illustrated and reads in part, “You have been consistently harassing Mr. Mathieu and his family regarding personal issues. Mr. Mathieu informed you that they have no desire to respond to your inquiries. Despite repeated assertions of this position… you have trespassed on the Mathieu’s property and otherwise violated their privacy… Demand is made that you cease and desist from any attempts at making contact with Mr. Mathieu or any member of his family.” Sheila Mathieu calls the article “unfortunate” and says she can’t understand why Sports Illustrated would respond so viciously to a family’s decision to keep private matters private. “They twisted things and cobbled together details from past articles because we wouldn’t sit down with them,” she told FOX 8 Sports.  “We have always believed in being a tight-knit family. God first, family second, work and school third. That’s what Tyrann is doing now, and he’s on an avenue to success, making good grades and putting his life in order.”   As Kentucky fans, we already question Thamel's journalistic integrity and standards, but this story from LSU is opening everyone else's eyes to Thamel's malicious ways of getting his story. If the bribery allegations are true, his days could be numbered. It's about time. (via Friends of the Program)