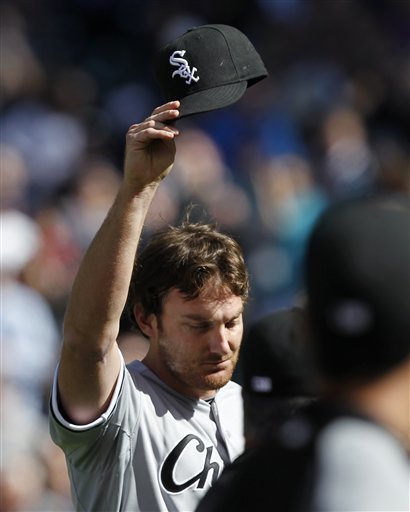 Have you ever heard of Philip Humber? Yeah, me neither. You're about to hear a lot about him over the next 24 hours. Philip Humber threw only the 21st perfect game in MLB history tonight. A perfect game hasn't been thrown in nearly two years in Major League Baseball, but the drought ended at the hands of Humber against the Seattle Mariners in a 4-0 victory. The perfect game was described perfectly by Humber after the game when he simply said, "What just took place was just awesome." Philip Humber entered the contest as a relatively unknown name in baseball. He was drafted as the 3rd overall pick in the 2004 draft by the New York Mets. Unfortunately Humber's career got off to a slow start due to an elbow-ligament replacement surgery that sidelined him. In fact, Humber didn't win a game in the majors until 2010. Now he has found his place in the history books as one of the few pitchers to achieve one of baseball's greatest feats. When the game was finally over and perfection was achieved, Humber fell to his knees as his teammates raced toward him. The moment for Philip Humber was perfect in more than one way.   Now on to the Kentucky sports news from the day/evening...   - The UK baseball team evened the 3-game home series with #1 ranked LSU in convincing fashion. The Wildcats used a hot start to pave the way to a 8-1 victory. Starting pitcher Jerad Grundy turned in one of the most impressive performances of the season, allowing just one run in six innings to pick up his first SEC win. Luke Maile added an 11th home run to his SEC-leading total on the season. The Cats and the Tigers will square off in what will surely be an exciting rubber match tomorrow afternoon at 1:00 p.m. in Cliff Hagan Stadium. More than just the series is on the line for the two teams, as the winner will not only take possession of the outright SEC lead, but possibly the top spot in the country as well.   - The Blue/White scrimmage, despite the cool weather, left many fans with a sense of hope heading into the summer. Although not all was positive for the Cats on the day, many felt that the apparent change in play calling was one of the most exciting takeaways from the game. The coaching staff clearly has confidence in Maxwell Smith's arm, as they drew up plenty of plays for him throughout the day. Smith finished with an impressive 45 pass attempts. Smith completed 29-45 throws for 353 yards and 2 TD's. The down side might have been his two interceptions, but one was a tipped ball. The incompletions were not all Smith's fault either, as eight of them were dropped balls. The coaching staff appears to have full confidence in Maxwell Smith following the spring season. Smith seems to have a better feel for the overall offense and settled into a rhythm as the game progressed, finding his targets on a variety of pass options.   - The most exciting playmaker (yes, I said playmaker!) was Demarco Robinson. Robinson caught 9 passes for 146 yards and 2 TD's. Maxwell Smith went to Robinson often and the two clearly have a nice chemistry building.   - Perhaps the two biggest bright spots in the scrimmage, outside of individual performances, were the overall improved play of the wide receivers and the commitment by the coaching staff to involve the tight ends in the offense. The young offensive line might be in for a tough road in the SEC due to their lack in experience, but the solid pass protection allowed Smith to throw the ball as a primary option. The run protection/blocking was a different story, and probably proved to be one of the biggest negatives coming out of the scrimmage.   - Despite the inclement weather, an estimated 4,500 fans made it out to Commonwealth Stadium for the Blue/White scrimmage. The following picture was taken moments before kick-off.

- The UK men's tennis team advanced to the SEC tournament finals by defeating Ole Miss 4-0 today. Kentucky will have a tough title match with #2 in the SEC ranked Georgia Bulldogs (4th in the nation) at 2 p.m. tomorrow. This marks the second consecutive SEC finals appearance for Kentucky and the third in school history. Good luck to the Wildcats as they look to sweep the major SEC championships by winning the tournament title to go along with the regular season title.   - Nerlens Noel made the rounds in Lexington today while on his official visit. Apparently he even found time to stop by Henry Clay High School's prom at the Hyatt Hotel.   - In case you missed it, the Cincinnati Reds will be honoring the national championship Kentucky men's basketball team on Tuesday night before their 7:10 p.m. game against the San Francisco Giants.    - In another bit of exciting news, we’re looking to add new writers to KSRCollege.com for the summer and fall semester. To qualify, you must be a college student (preferably at Kentucky) and send a resume and a writing sample to [email protected] Entries need to be in by Monday, April 22, and all applicants must be available for an interview in Lexington on Sunday, April 29.