"So then I says, well, we're up 40, why not make it 47? Shucks, you had to be there, but it was a riot." State of the Program: We all know Steve Spurrier is the epitome of a douche; an unapologetic d-bag at that. But damn it if we don't respect his resume and his ability to flat get it done on the collegiate level. The guy won at Duke. Duke! The Spurrier hire in 2004 was certainly enough to ease the pain of the probation left by the lurching but otherwise cuddly Lou Holtz, and after two "decent" seasons in Columbia, it appears that The Ol' Ball Coach has the Cocks right where he wants 'em be: on the cusp of penetrating the upper echelon of the SEC. Remember, this is a team that lost to Auburn, Tennesee, Arkansas, and Florida last year by a TD or less. So you're telling me there's a chance: Spurrier's third Gamecock team is rife with experience and loaded with young talent. Sr. QB Blake Mitchell has done his best Joe Kane impression over the years, but he certainly posesses the tools to be effective, especially under Spurrier's hand, who happens to be the Mr. Miyagi of the college quarterback. Throw in Sr. RB Corey Boyd, and LB brothers Jasper and Casper Brinkley, and you've got a bunch of Cocks oozing with proven talent. Hey, what was all that one and a million talk: The one facet of this team lacking in experience also happens to be the most important: offensive line. The three interior positions will all see new guts in the starting lineup, and if the Spring was any indication, they have a ways to go if Mitchell, Boyd and Co. hope to see their talents fully realized. Likewise on the D-line, where SC was vulnerable against the run last season. What's in a name? Comedy: I'm going to take a shot here, and say that no black man ever wants to be named Casper, but I guess when you're a 6'2 257 lb. LB it doesn't really matter what they call you. Should Mitchell go down with an injury or just flat "stink" it up, RS FR. Chris Smelley will be the man behind the plan, and we'll all share a laugh. Schedule: The non-conference slate of UL-Lafayette, SC St., and UNC shouldn't pose much of a threat for this team, and they get Clemson at home to close the season. But they must travel to LSU, Tennessee, and Arkansas. If SC wants any hope of winning the East, they must sweep their home slate and take at least one of those imposing road games. 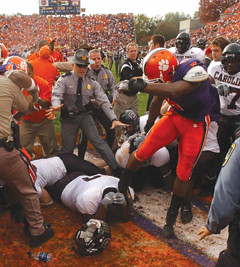 The pagentry of college football Giving back to the community: Elite-11 QB recruit Stephen Garcia might one day be SC's answer to Rex Grossman, but it doesn't help when you get busted keying a professor's car. If that weren't enough, just a month before Garcia was booked for public drunkeness. What an a-hole. He'll fit right in. In conclusion: South Carolina has become quite the trendy pick of late to "darkhorse" their way to an SEC East title. They certainly have the talent, depth, experience, and head coach to be worthy of the praise, but will they finally be able to take the step from middle-of-the-road to conference power? Spurrier thinks so, and that's a scary thought. So is this commercial...