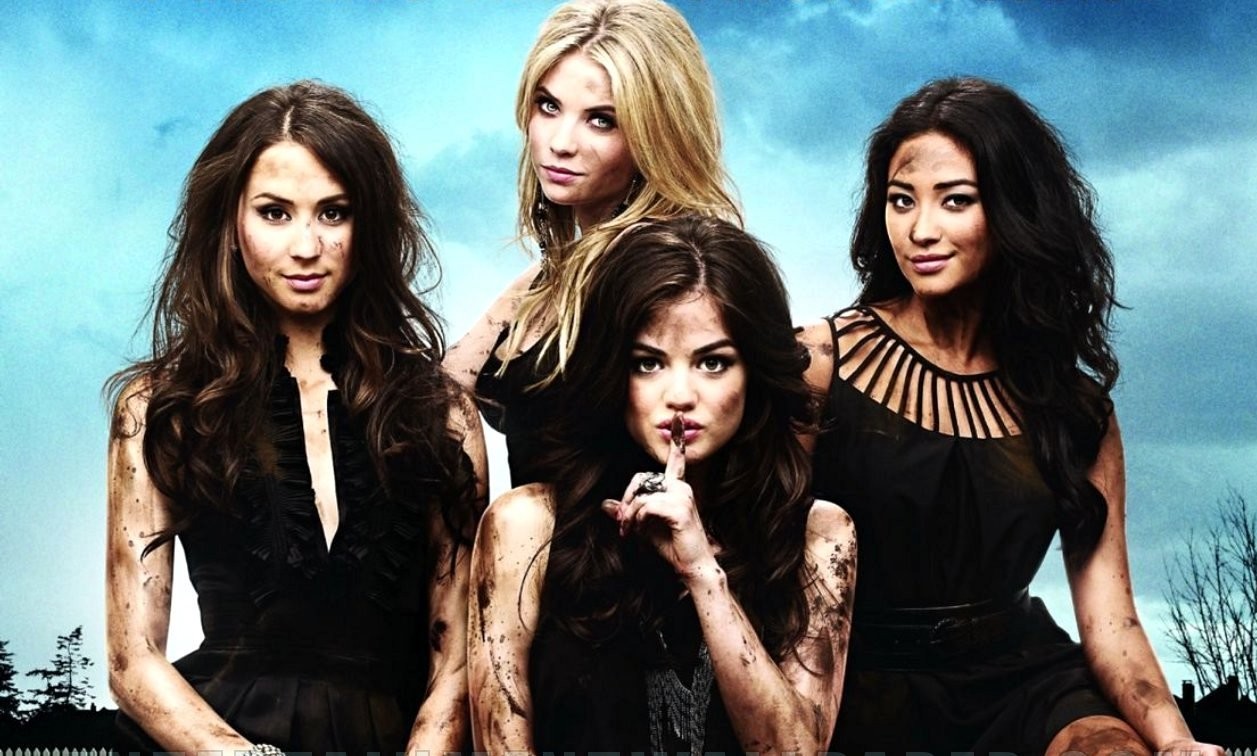 I'm going to get some flack for this, possibly even taking the reigns from Aaron Flener as the "why is this on a sports blog??!!" KSR writer, but in the immortal words of Icona Pop, "I don't care" (though if I crashed my car into a bridge, I would). The ABC Family surprise hit, Pretty Little Liars, is on its fourth season. Chances are you've heard of this teen drama. C'mon, admit it. If you know a middle school girl (that sounds creepier than intended) it is likely that she and her friends have been having PLL parties every Tuesday night this summer; you didn't know what the hell a PLL was or why there was so much giggling and screaming, but you wanted it to stop. Well, I'm here, as the resident Funkhouser female and therefore, pretty little guru, to fill you in on the madness. [caption id="" align="alignnone" width="520"]

That's pretty much every episode..[/caption] The show is set around five high school girls in a small town in Pennsylvania. Their best friend and ringleader, Alison DiLaurentis, goes missing one fateful night. I blame teen drinking. One year later, her body is found, bringing the four (living) friends back together. What follows is four seasons of a deranged stalker or stalkers calling him or herself "A" and terrorizing Emily, Aria, Hanna, and Spencer because they have are far too gorgeous to be real high school students. And they have an obscene amount of secrets. Everyone is suspicious, and half of the town has been murdered so far in the series. There are a lot of questions, and few have been answered. Assumably when the show's producers run out of victims, Pretty Little Liars will draw to a close, or maybe the actors playing high school students will bring their grandchildren to the set. Who knows? My relationship with the show began as most things do, on a rainy day in Lisbon, Portugal. I was bored and looking for some good ole American television when I came across this show Pretty Little Liars. Clueless, I clicked it and ended up watching ten absolutely bat s*** crazy episodes in a row. From that day forward, a cable program targeting tweens and teens became one of my guilty pleasures, but thankfully I'm not alone.   While the show may not seem relevant to most KSR readers, I would argue that it is in fact quite pertinent, as a pop culture phenomena, and especially to those who consume social media. Tuesday night was the summer finale of the show, which shattered "social tv records," which apparently are a real thing tracked by Nielsen, with 1.9 million total tweets about the episode, 38 trending topics, 10.2 thousand tweets per minute, and 637 thousand individual contributors. https://twitter.com/KySportsRadio/status/273494993572880384 https://twitter.com/GrantTraylor/status/334339716306591745 Some noteworthy Twitter moments you may remember.. Many of our readers have been sucked into the world of Twitter in order to follow their favorite athletes, coaches, and media members in the sports world. What has followed is the development of instant access not only to adults and "celebrities" like John Calipari, using the platform as a brand-building tool for the Kentucky basketball program, but also a way to look into the lives of young athletes like we never could before. Even if you're not on Twitter, as a Kentucky fan its importance cannot be overstated for the latest big news and announcements, along with the hideous side effect--a tool for idiots to take out their rage on high school and college kids, directly. It can also be used for good rather than evil, and the Big Blue Nation shows up in force on the site, following and supporting recruits who often take notice. https://twitter.com/BrennanKSR/status/354616409453633536 Oh Marshall, I feel so close to you. https://twitter.com/NativeFlash22/status/352138225273421825 PLL not drugs. https://twitter.com/NativeFlash22/status/352119191660269569 Other than cocaine, it's obvi PLL. https://twitter.com/NativeFlash22/status/349579200748978176 I once made a Pretty Little Liars cake. Fact. And while you may not love Pretty Little Liars like Marshall Henderson does, the show is using social media--Twitter, Instagram, Facebook, Tumblr, to the utmost in order to get the best possible advertising, direct word of mouth from viewers, producers, and stars of the show. In this new Internet age of television, network, cable, and even HBO/Showtime television must adapt to the Netflix age of binge watching. Netflix used this same model in order to get its newest program, Orange is the New Black, to become a seemingly overnight sensation. With little fanfare on its initial release, Twitter and word of mouth created a smashing success. https://twitter.com/lucyhale/statuses/372524066533437440 Actress, Lucy Hale interacts with fans of the show regularly. In order to keep viewers interested, and avoid the trend of all-out cancellation of cable plans, studios must get creative in order to compete. The money is made when people watch live, and other than live sports many people rarely sit through advertisements to watch a show live. https://www.youtube.com/watch?v=hqtWxv_Dnds "A" is revealed. Aaaaaahhhhhh and it's the teacher that was dating a high school student, how fitting! But Pretty Little Liars motivates its fans to watch the show as it's happening, with friends and with their phones, to live Tweet reactions to what's happening on the TV. There were 70,000 tweets in the final minute of the show. 70,000. That's absolute madness for a program on ABC Family, which was only relevant to me for Harry Potter marathons prior to the premiere of Pretty Little Liars. The show is so popular it is has spawned its own spinoff that's premiering this fall. While I'm certainly not trying to convince anyone to watch Pretty Little Liars, we as sports fans and consumers of pop culture can take a queue from the Pretty Little Liars fandom. The Internet is a powerful tool and John Calipari may be the social media guru in the college basketball world, but there's no doubt that PLL is ahead of the times in television circles; each are masters of creating a brand and getting people talking. https://twitter.com/D_Barker7/status/372481716734013440 Drew Barker and Mark Stoops are doing the same  for Kentucky football, building it into a household name that people want to be involved with, and the Internet is a huge part of the renaissance. It's part of why I'm headed to a Kentucky road game this Labor Day weekend, instead of staying home with Netflix. So thank you Mark Stoops. Yahtzee, and see you in Nashville BBN. @BrennanKSR