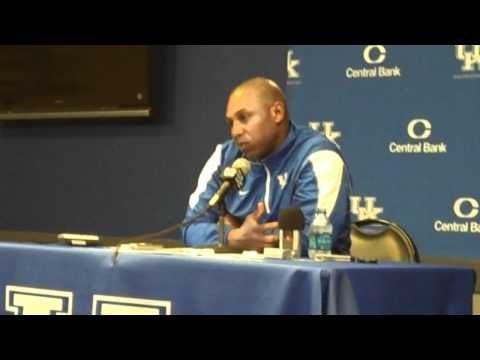 Kentucky fell short last night against #13 ranked Georgia in Lexington. Joker Phillips met with the media for his usual post-game comments, and here are some of the highlights: Injury report: "Zach West reaggravated his shoulder, which is a sprain. Jalen Whitlow had migraines, had distorted vision. He came back late in the game. Cartier Rice has a hip flexor that he reaggravated that he had last week." Phillips: "I thought our team played with great effort. Did a better job getting off the field on third down. I think at half they were 4 of 6. Second half 5 of 12." "We held them to 41 at half (rushing yards), 77 yards total rushing, which is what we have to do, not allow people to run the football on us. Held them to their second lowest points of the season. We rushed the ball, which gave us a chance." "Again, we've got to do a better job of throwing and catching. But, again, no one can say this team's quitting. We have a young team that comes to practice, excited to play, excited to practice, and that's the type of effort you saw tonight with these guys. We got to continue to get better." (Asked if he was worried that his team had quit after last week): "No, I was never worried. I wanted to make sure everybody understands this team does not quit." (On the onside kick): "Well, we didn't get the right speed on the ball, first thing. He was just waiting for the ball to cross the 10 yards. Heads up play by him." (When asked about the motivation, now that a bowl is not mathematically possible): "We got some seniors in there. We're motivated to play for those guys. Those guys have done a good job of leading this young team. I can tell you this, those young guys are going to fight their tails off for those seniors who have been with us for a long time." (Regarding the continued use of Morgan Newton): "I just think it's good for a young guy like Jalen to be able to step back after a couple of series. Today it was during the first series, step back, see the game from the sideline, let the game slow down a little bit. We got Morgan in there on the first series in the red zone. I think the red zone is usually when you like to do your wildcat stuff. That's what Morgan is for us, a wildcat quarterback at times. In the red zone, you'll see more of him." "Jalen has never looked uncomfortable. Maybe to you, but he's never looked uncomfortable because he always has a good demeanor. He doesn't get rattled. I've never seen him look uncomfortable. Today I think he had a better command of the football." (On whether or not the last play was frustrating): "Well, I don't live in 'almost.' I mean, at the end of the year you don't say, we almost win. The records will say wins and losses. We come out here to try to win. We don't come out here to almost win. We come out here to win." There you have it folks, the post-game comments. Carry on with your Sunday.