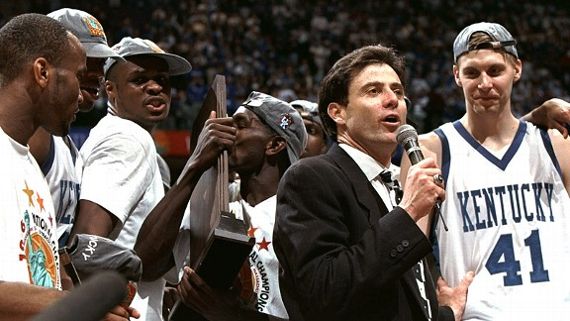 The University of Louisville head coach loves to talk about the Kentucky Wildcats.  Sometimes he's doing it to take subtle shots at John Calipari, other times it's to talk about his best Kentucky teams.  This time it might be a combination of both. Pitino joined Jon Rothstein in the College Hoops Today podcast to talk about his team, but more importantly, he talked about his '96 team.  Not long after they celebrated their 20-year reunion, he once again proclaimed the '96 Cats as the "greatest team ever."

“We just had our reunion in Miami (the 1996 team) and the hat said on the side said, “greatest team ever”, Pitino said.  “I think in modern times, that Kentucky team with a 24-point average of victory, averaging 94.1 points in a much tougher SEC – I think they were one of the best teams of all-time with eight players that played in the NBA and the 13th man on that team was Nazr Mohammed. That was a great basketball team.....

This was a case of, "I love you, but."  Pitino believes this year's Duke team could be just as good as the 1996 team "in terms of talent."

“They’ve got a fifth-year guy (Amile Jefferson) who’s a terrific rebounder and basketball player and they’ve got great shooting, great coaching and a great system,” Pitino said. “They’ve got it all. They’re very deep and they’ve got two of the best in Jayson Tatum and Harry Giles – the one-and-two ranked high school players in the nation. They’re as good of a team as I’ve seen in the modern era.”

Pitino might have changed his tune a bit if this interview occurred later in the day.  Harry Giles missed his senior year of high school with a torn ACL in his right knee.  Today the No. 1 player in the 2016 class had arthroscopic surgery on his left knee, the knee that required ACL repair during his sophomore season. I can't tell if Pitino is trying to pump up Duke, throw shade at Calipari's Kentucky, or both.  Either way, he needs to keep the Cats' name out of his mouth. [U Sports]