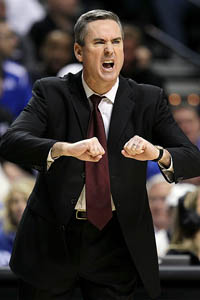 With a brief blog post on CoachCal.com earlier this week, UK coach John Calipari made what he called his final statements on the Enes Kanter subject and said he would not speak about it again until a decision was made regarding the Turkish big man.  But, that doesn't mean that everyone is zipping up their mouth on the subject.  At the SEC Media Day Thursday, Kentuckian Rick Stansbury, now coaching at Mississippi State, said some interesting things on the subject of Enes Kanter and John Calipari's thoughts on the topic.  Stansbury told those in attendance that he not only thought it was wrong to cite Dee Bost's reinstatement at MSU as a related incident, but that he thought that if Kanter is cleared to play, it represents special treatment for Kentucky.  And, according to Stansbury, it's not the first time they've been the recipients of leniency.

"He's not a pro," Stansbury said. "... For any kind of comparison to be made, I don't think Dee is a good one to make it on." Stansbury intercepted Calipari at Media Day to personally make that point. Stansbury, who last season questioned whether Kentucky gets favorable treatment because of its status as a traditional basketball power, repeated that theme when asked about the Kanter case. The NCAA is reviewing the player's eligibility status in light of his having played three years for a professional team in his native Turkey. "Everybody across the landscape of college basketball understands what that situation was," Stansbury said. "Everybody is probably waiting to see (if) Kentucky gets something, is it because, with Kentucky, something's maybe different than another school."

Should be fun when Stansbury returns to his home state on February 15. Tipton's story is here