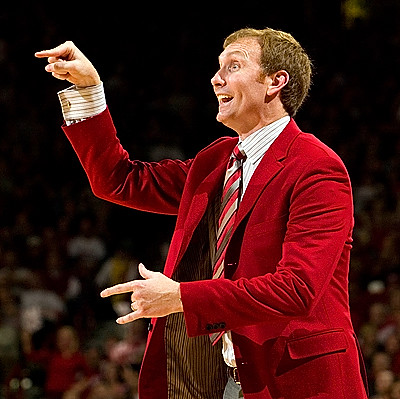 Pelphrey implores his team to execute The Three Stooges Offense set. Their response? S'ointley. Continuing the Saturday-trend during this last weekend of college basketball before conference tournaments start, here is your list of games that are coming up: 4:00p (25) Texas at (22) Baylor [ESPN] Mississippi at Arkansas Texas Tech at Colorado Virginia Tech at Georgia Tech Rhode Island at Massachusetts Texas-Pan American at North Dakota Winthrop at Coastal Carolina [ESPN2] (CHANTICLEERS!) Central Arkansas at McNeese State Wyoming at UNLV La Salle at Saint Joseph's St. Bonaventure at Xavier UCLA at Arizona State [CBS] (What? Really, CBS?) 4:00p-5:00p Rutgets at (18) Pittsburgh Seattle at Utah Valley Manhattan at Siena UNC Greensboro vs. Wofford (neutral site) 5:00p - 6:00p Georgia at LSU Texas Southern at Southern University Illinois State vs. Wichita State (neutral site) Detroit vs. Wright State (neutral site) Not as many high caliber games as the first two rounds, but there are SEC implications. As noted below, the SEC West is still a wide open race in terms of seeding in the SEC tournament. Arkansas is the key game and if they lose, . A Georgia win . Update #1: Aaaaand Louisville beats Syracuse and Pitino continues his dominance over his role model. Thanks, Louisville. Update #2: Aaaaand South Carolina takes care of Vandy for UK. ENJOY THE SEC CHAMPIONSHIP, EVERYBODY!