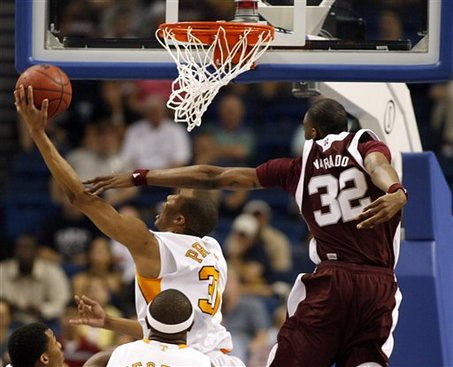 Ugh. I'll say it again: I won't miss either of these guys next year. Ok, here comes the thread for the final games of a big college basketball Saturday. It has been awhile since I have had this much fun as a UK fan rooting for teams that weren't blue. Here we go: 6:00p Iowa State at (5) Kansas State (13) Tennessee at Mississippi State [ESPN] (15) BYU at TCU Hofstra vs. Northeastern (neutral site) Harvard at Princeton (backdoor!) UMBC vs. Vermont (neutral court) Jackson State at Alabama State Mercer vs. East Tennessee State (neutral court) [ESPN2] California at Stanford [Fox] 6:15 San Jose State at Boise State 7:00 Cornell at Yale (Coulter and Olbermann are anxious on this one) Dartmouth at Pennsylvania Columbia at Brown Grambling State at Alabama A&M Citadel vs. Appalacian State (neutral court) Saint Louis at Dayton UMKC vs. Oakland (neutral court) Seton Hall at Providence Texas-San Antonio at Stephen F. Austin 7:30 ish Arkansas-Little Rock vs. Arkansas State (neutral court) Canisius vs. Fairfield (neutral court) New Orleans vs. Western Kentucky (neutral court) 8:00 Morehead State vs. Murray State (neutral court) [ESPN2] Southern Miss at ECU Texas-Arlington at Texas A&M-CC Marshall at Southern Methodist 9:00 North Carolina at (4) Duke 9:05 UAB at (21) UTEP I've typed out a bunch of teams nobody cares about in earlier posts and I'll be darned if I type out all the West Coast teams that are going to play tonight. Even the best basketball fans on the planet don't care about San Diego playing Portland at 11:30 tonight. How cool is it that the premier match-up of the late night is in the SEC and not the ACC? UT vs Mississippi State is a much better game than UNC/Duke and the fact that College Game Day can't call an audible on that is atrocious. Locally, the big game is Murray State vs. Morehead. Note that the game is televised on ESPN2 and it should be a good one. Enjoy the games and let's hear it in the comments.