It's Maui.  It's the Championship game.  What more do you need?  Another mention of Matt's girlfriend?  Don't worry, I'm sure it's coming soon. Meet the UConn starters...

#15 Kemba Walker, 6-1, G, Junior 2010-11 stats: 30.3 ppg, 3.0 apg, 4.8 rpg, 2.3 spg, 51% from the field, 36% from three What a difference a year makes.  Last season, it was Walker calling out John Wall prior to their matchup in NYC and saying that he was going to take it at the UK point guard, who was the the nation's best at his position.  Just a few months later, Walker is the nation's leading scorer and the apple of Jimmy Dykes' eye as he heads into a battle with yet another UK freshman point.  He's been on fire lately, averaging 34.3 points in the last three games, and is doing it fairly efficiently.  Everything UConn does begins and ends with him.  If Kentucky can cut him off early, then the game is over.

#3 Jeremy Lamb, 6-5, G, Freshman 2010-11 stats: 6.0 ppg, 5.0 rpg, 1.3 apg, 1.3 spg, 1.3 bpg, 35% from field, 10% from three Lamb is one of six freshmen on the UConn roster this season and has found himself struggling so far on the offensive end.  After a 14-shot performance that included going 1-7 from downtown in the season opener, he's been a little more timid with his shot, hoisting only 17 in the past three contests.  In tonight's Lamb-on-Lamb action, Vegas has placed Jeremy as the favorite to be sacrificed.

#5 Niels Giffey, 6-7, F, Freshman 2010-11 stats: 3.0 ppg, 1.8 rpg, 1.5 spg, 36% from field During his tenure, Jim Calhoun has built an impressive tradition of producing solid wing players like Richard Hamilton, Caron Butler, Rudy Gay and Ray Allen.  Niels Giffey takes a Shagari-sized dump on it.  He does some things on the court, but none worth mentioning.

#34 Alex Oriakhi, 6-9, F, Sophomore 2010-11 stats: 12.3 ppg, 12.3 rpg, 59% from the field, 45% on free throws Oriakhi is easily UConn's second-best player and appears to have developed into the type of player many hoped he would be last season, when he averaged only 5 points and 6 rebounds per game as a freshman.  Fresh off of a 15-point, 17-rebound performance against Michigan State, Oriakhi is going to challenge Kentucky's big guys on the boards.  And if they aren't up to the challenge, the guy who had nine offensive boards last night is going to make them pay.

#35 Charles Okwandu, 7-0, C, Senior 2010-11 stats: o.8 ppg, 1.5 rpg, 1.0 bpg, 17% from the field The UConn Mark Coury.  This spot is kind of a guess as this point as Calhoun has used three guys in four games to fill the fifth starting spot, based on matchups.  Okwandu has gotten the nod the last two games and played a grand total of 19 of the 80 minutes.  He's averaging 8 minutes per game on the season, good for second-lowest on the team.  He's a native of Nigeria and a junior college transfer, which means he has a "people think he's going to develop into a star when he arrives and doesn't do much" double major. 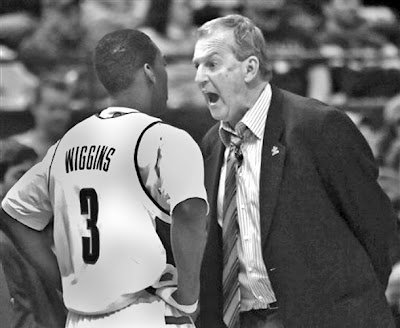 Head Coach Jim Calhoun Has a foul mouth, a bad heart and a distaste for Calipari.  Bench - Roscoe Smith (F): The 6'8" forward is the highest rated freshman in the UConn class (37th in the nation).  The team's third leading scorer at 9.8 per game and second leading rebounder at 5.3 per contest.  Has made 6 of 9 threes this season. - Shabazz Napier (G): Freshman point backs up Walker and is the team's fourth-leading scorer at 9 per game.  Opened the year 4-6 from downtown and 3 assists to 0 turnovers.  In the three games since, he's shot 1-11 from deep and registered 4 assistsa nd 8 turnovers. - Jamal Coombs-McDaniel (G): Has made 4 of 16 shots on the season and 1 of 8 threes.  Shot only 32% last year. - Ater Majok (F): Currently playing in Turkey after averaging 2.3 points per game last season.  Thanks, Clyde. Notes: Kentucky is 1-1 against UConn all time...UK has never won the Maui Invitational (lie) ...Don't believe the people in the comments sections...Those aren't their real names...It is again expected to be a very pro-UK crowd...UConn already knows that Kentucky fans are everywhere...Calhoun is still angry about the guy asking about his salary, but did apologize to a reporter once....I'm still waiting for him to apologize for Jake Voskuhl's hair...I stood next to Jim Calhoun at the Super Showcase in Orlando last summer...He didn't smell like bourbon and cigarettes, but he talked like he should...The game starts at 10...These late games are wearing me out...Go Cats?