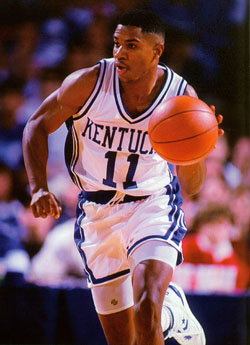 Kentucky basketball fans will see a familiar face on the opposing sideline tomorrow night when the Wildcats play host to the Jerry Rices of MVSU.  Former UK great Sean Woods is the head coach of Mississippi Valley State, and for the second time in three years, he's bringing his Delta Devils into the arena where his #11 jersey hangs from the rafters. Woods and his old teammates Richie Farmer, John Pelphrey, and Deron Feldhaus make up the "Unforgettables," Kentucky's legendary senior class who stuck with the program through probation and reached the Elite Eight in 1992.  In that Elite Eight game (you know the one), Woods scored 21 points for Kentucky including the "unforgettable" runner over He-Who-Shall-Not-Be-Named with 3 seconds left to play.  I don't really remember what happened in that game after Woods' floater but I think Kentucky won by like 50. Kentucky is MVSU's third consecutive SEC opponent this season after losses to Ole Miss and Arkansas.  In their previous meeting in 2008, Kentucky defeated Mississippi Valley State 88-65. Welcome back, Sean.  We haven't forgotten you.