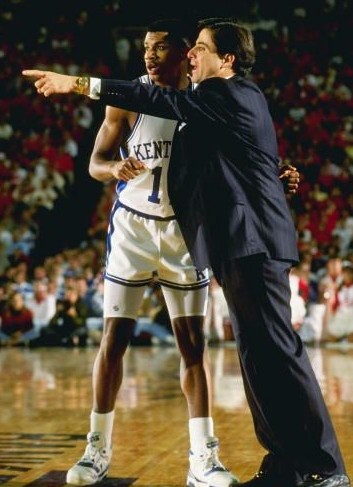 Sunday should be quite a day in Rupp Arena. First, there is the memorial tribute to Bill Keightley at halftime of the game and is sure to be emotional. But also there is the return of Sean Woods to Lexington. Woods is an often forgotten member of the 1992 "Unforgettables", the only one not from Kentucky but the individual who possibly had the most famous play of the entire run, his one-hander in the lane that gave Kentucky the lead over Duke. That shot led to the famous quote Verne Lundquist, "how did he find the courage to take that shot?", followed by the line from Len Elmore, "Ok he made it....but that was a terrible shot." Woods is a legend at UK and his return as a coach will be great to see. Besides his famous Duke shot, what are some other memories of Woods that you have? For me, I remember the game against Mississippi State (I believe) in which the Cats were down three and Woods, not knowing the score, drove in and hit a two as time expired. While it was a poor decision, Woods said afterwards that he would make up for it before his career was over. And that, he most certainly did. Give Woods memories below.....and give Sean a big welcome on Sunday.