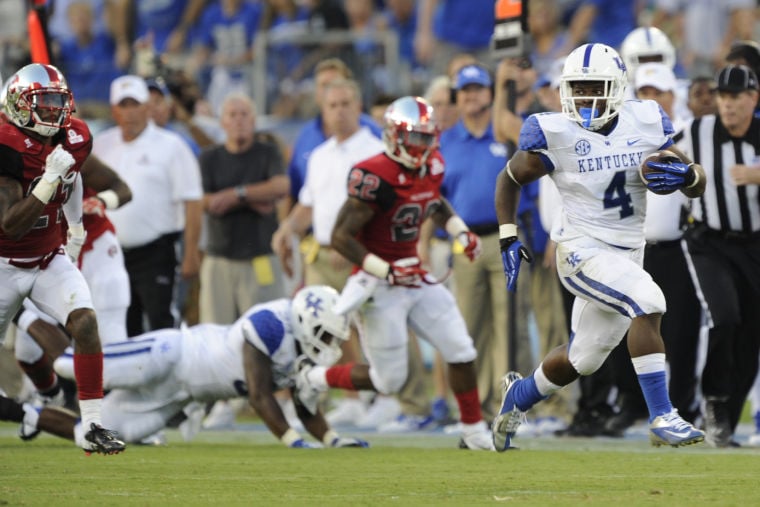 Heading into last night's game we all expected a new Kentucky football where the ball would be zipped around and the defense would be able to handle most of the basic fundamentals. Instead we were shown just how bare the cupboard was left following the Joker Phillips era. Perhaps we forgot just how bad the team looked at times during a 2-10 year and how long it takes to turn around a program that almost resembled a team on probation. By all indications Stoops has things on the right track for the future of Kentucky football and if you looked amongst the muck of last night's game you could pick some out. Here are some of the positive takeaways I saw in last night's game: Ground and Pound While it wasn't what you'd expect from an offense called the Air Raid the Cats did show that the running game is truly a strength of this team especially when Whitlow is at the helm. Whitlow didn't look too sharp on his passes early in the game which could have lead to the conservative play calling we saw all night but he did showcase his ability to run. Raymond Sanders showcased why he will be one of the leaders on offense this season with big runs that gashed the WKU defense. When Kentucky needs some short yards this season they should be able to pick them up on the ground. It's good to know we have another option when chucking the ball just isn't working. Even Jojo Kemp looked good the couple of times he got his number called which leads to a larger point. New Guys Make An Impact Nate Willis. Za'Darius Smith. Ryan Timmons. Javess Blue. A majority of the time last night the announcer would read the name of a new player on both sides of the ball. It's promising to see these guys change the game in their Division-1 debut and as the team improves during the year I'd expect to hear their names called more and more. Za'Darius landed his first college sack. Timmons had a big dynamic run that was spoiled by the fumble. Blue was one of the only receivers that looked ready to catch the football. We are in for a long season but with guys like Kemp and company the foundation is there for success come year three. Two Quarterbacks That Can Play When Max Smith checked into the game and led the Cats down the field on almost three consecutive drives a Quarterback controversy was born. Whitlow can throw the ball a bit or torch defenses on the ground. Smith can air the ball out with what looked like good accuracy despite being against a prevent defense. Smith looked like the best option for the offense at the close of the game. Whitlow looked like he does have a purpose behind center although perhaps it's best reserved for some special packages. Either way it never hurts to have two guys that you know can get the job done. Now it's just a matter of finding out which one is best suited for what Neal Brown wants to do for the rest of the season.   Sometimes it's hard to look at a bad situation and see the good but I think there was definitely some things to be happy about in last nights game. What did you see that you liked in last night's game?