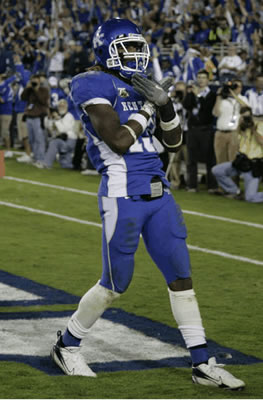 I spent a couple of hours on Saturday watching a replay of the great Kentucky upset win over #1 LSU in 2007 and it occurred to me that very players had bigger plays in a shorter career than Stevie "Got Loose" Johnson. Two of the most memorable wins in the last 30 years, and he had the winning touchdown in both. Well now Stevie is getting it done in Buffalo and today he went national. The Big Lead had a post this morning linking the freestyle rap that Stevie did before a game in 2007 and gave Stevie Styles (is that what people call him?) some love. The Big Lead has always been very nice to us and is one of the two or three most popular blogs in the country. Good to see Stevie getting some attention while chasing the dream in upstate New York.