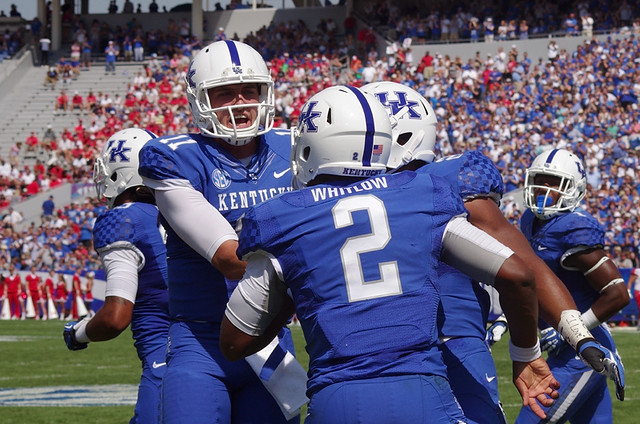 During his turn on the SEC Teleconference this morning, Mark Stoops talked about playing Teddy Bridgewater, how the 2-QB system is working out, and using Jalen Whitlow in certain situations. Here are a few of his remarks:

On the QB rotation against Miami: We had it in the game plan when we scripted the beginning part of the game. We had it scripted in there where Jalen (Whitlow) would go in. It went according to script there. We had Max (Smith) start the game, you know with our tempo offense, get moving the ball a little bit then we inserted Jalen and had some quarterback runs in there along with some play-actions and different things. It worked very well in that game, and we’ll continue to do that, continue to work with that. We think each player brings a different skill set to the game. They both do some good things. They’re both still learning, they make some mistakes. So, that’s just the situation we’re in right now. I’ve said this before: if one guy would just take the job and run with it and win the starting position clear then he’d be the guy. It’s just we feel like right now with both guys it gives us an opportunity to win and it’s an advantage to play both of them right now. On defending Teddy Bridgewater: He’s just an exceptional player. You see each and every time he takes the field, he’s just more and more comfortable. He’s a guy who has great athleticism, but that’s just to buy time, that’s just to set up in the pocket quickly. He’s very good on the boots and waggles. He’s obviously very athletic, but then he’s just got a tremendous arm. He can get the ball to all the spots on the field, make all the throws. The biggest thing that jumps out at me, a couple things: Obviously, he’s got great vision. He’s got great vision; he sees everything on the field and he seems to always get the ball to the open spot. He sees what you’re doing very quickly and obviously that comes from the experience that he has. He’s played an awful lot of football games. And then, he’s just very poised. He’s moving very quickly and all that, but it he just seems to be, seems like the game’s in slow motion for him. He’s very, very patient, very poised. He’s a very good quarterback and deserving of all the accolades he’s getting.

Now, here's a question for you guys: how long do you see UK using the QB system this season? Is it just a matter of time before Maxwell or Jalen pulls ahead?