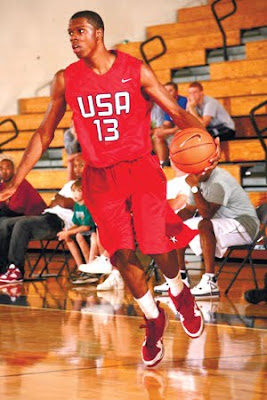 Last night, Terrence Ross made his commitment to Washington while on a visit there, according to Zag's Blog. It has long been speculated that Ross was a Washington lean but there is very little known about where Terrence Jones may be leaning. Personally, I feel that most of the people who want to believe Jones is leaning to Washington have based a little bit of that feeling on knowledge of Ross' situation. That wasn't a bad assumption either, since it always seemed like a good possibility that Ross and Jones would attend the same school. But now what? When asked about the possibility of Jones and Ross playing together in Washington, Ross told Zag's Blog, “I mean I talk to him about it and try to tell him we would be nice together but the decision is up to him." Is Washington out of the picture for Jones? Probably not. But you have to wonder whether Ross would make his commitment to Washington alone, knowing that the original plan was for Jones and Ross to announce together, if he believed Jones could still pick Washington. Jones was on a visit to Kansas this weekend but he has eliminated them before and his mother insists that they will not be in the mix during his final decision. You'd have to think they are in there somewhat though, if he were willing to spend time taking an official visit there. Still, official visits are funded by the school and Jones had one remaining even though he has visited all the other schools on his list, so he really didn't have much to lose by at least taking a look at Kansas. How much Kansas will factor in is still a bit of an unknown and could be called the wild card in Jones' recruitment. Outside of Washington, Kentucky has been the most cited as a the favorite to land Jones. If you believe that Ross would have waited until Saturday to announce if he believed that Jones was coming with him, then you also have to feel pretty good about UK's chances at this point. I think it would be fair to say that if Kentucky was on the West coast, or Jones was from the East coast, they may have already gained his commitment. Jones is in love with Calipari's offensive scheme and the freedom it would give a versatile forward like himself. This week will most likely be a busy one for Jones. He'll probably have players and coaches from UK calling, Josh Selby and coaches from KU calling and most likely more than a few conversations with Ross. This Friday we will know for sure. Knowing where Ross was going would have been a great sign for that school when it comes to Jones, but under these set of circumstances, one can't be so sure. *With contributions from the stunningly sexy Drew Franklin