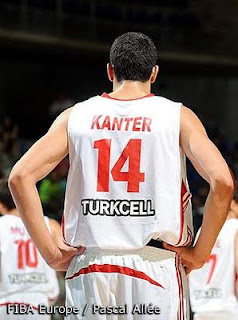 Today, much like the weekend, was chock full of more rumors that Enes Kanter may be making a decision soon. I've had a few people tell that Kanter may be close to deciding and it seems that Anthony Wireman at Allkyhoops.com is hearing the same. There seems to be a couple reasons why this rumor is gaining so much steam. The first is that Kanter had a great time while in Lexington. Each person that says UK is close to sealing the deal with Kanter also mentions that the visit was a very successful one for Kentucky. Matt also felt that the visit went well, citing earlier today that Kanter seemed in great spirits throughout the game. Secondly, this morning I spoke with a source very close to Kanter that confirmed that UK had in fact made a formal scholarship offer to the big man this weekend. This is big news because it says that UK is very interested and feels that Kanter might feel the same and, more importantly, it says that UK's staff feels confident that Kanter would be eligible to play in the NCAA next year. There were some lingering questions about said eligibility that held off some schools from extending that offer. The questions stemmed from his Euro days but if UK is willing to extend that offer, I feel confident in saying that they've studied the situation enough to believe that Kanter will survive the clearing house's scrutiny. Another source close to Kanter that I spoke with, one that I feel would know more than anyone else about his situation, did say that while the visit and his Lexington experience did go extremely well, there's still going to be a little work to do in order to get Kanter to the point of pulling the trigger. This news in no ways means that the above cited sources aren't going to end up being right, it just means that they might be right a little later than they're expecting. Putting all this together and weighing the different sources, here's what I believe: Kentucky feels that Kanter will be eligible next year and they definitely want to add his talent to their 2010 class, hence the offer. Kanter is very high on the Cats at this point but wants to make completely sure that he is 100% in his decision this go around, something that isn't surprising for a kid who has already had to reevaluate his commitment once before. UK seems to be the firm leader at this point and I fully expect this staff to continue their superb work with Kanter and try to seal this deal soon. While sometime soon does seem to be a good estimate on when a decision could be made, very soon is probably stretching it just a bit.