Before we start, I just wanted to say that a few of the suggestions from the comments yesterday were pretty useful and therefore I'll be tweaking the bracket just a bit for the media regions, which will run in a couple of weeks. That said, without further ado, let the player hating begin. 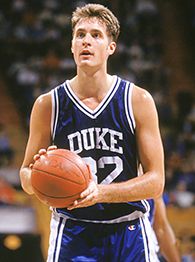 (1) Christian Laettner - The most obvious place to start this competition, as anyone would tell you. I won't be getting all riled up over the King of all Douchebags quite yet, though. Something tells me Ms. Laettner will be hanging around the bracket for a while, so I'll save my public angst for another day. I think I'll just let the commenters handle it this round, but please, pace yourselves.

(8) Edgar Sosa - This tool, on the other hand, is only hanging around for one round. Edgar Sosa represents all that is wrong with basketball. Over-hyped to the point where he's deluded into believing he's actually good, he's one of those guys who manages to piss you off even when he's going 2-for-17 and ruining any chance poor Loserville had of overcoming his shittiness. There's a lot of reasons this guy irritates me, but the main one is his face. Seriously. In any given shot of Sosa, he's either trying to look like he's in a cologne ad or one of those kid-rap videos with no curse words and lines about doing your homework. When he's not all dolled up, he suffers from a little disorder I like to call "Hines Ward Disease," which is when a goofy smile is plastered across somebody's mug, no matter what just happened. Get fouled? Smiling. Hit a free throw? Smile. Layup? Smile and beat his chest. Get called for over and back? Let's see those teeth that are so jacked up, it looks like his tongue's gonna need a rock hammer and a poster of Rita Hayworth to get out of jail pearly whites. And, of course, there's this. Luckily, Eddie will be returned to his proper home as an insignificant speck on the basketball radar after he becomes possibly the first person ever to be shut out in an internet poll. VOTE ON THE POLL AT THE RIGHT